Ok, how many people knew who I was talking about when I teased this one a few days ago? 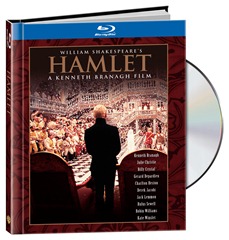 I’m happy and grateful to report that Warner Brothers contacted me and asked if I could review the new release of Kenneth Branagh’s Hamlet, new on Blu-ray DVD (official release date Tuesday August 17, 2010).  “I don’t have a Blu-ray player,” I responded.  “Can I get some for giveaway?”  Sure enough I’ve now got two, count ‘em, *2* brandy new, hot-off-the-presses, before-he-directed-Thor, Kenneth Branagh Hamlet’s.  It’s not even like I can keep them for myself, because I’m not kidding, I don’t have a player for these bad boys! I don’t expect that any regular readers will need a synopsis of this one, but they kinda sorta requested that I make this a mandatory part of the post.  So:

“Hamlet has the kind of power, energy and excitement that movies can truly exploit,” award-winning actor/director Kenneth Branagh says.  In this first-ever full-text film of William Shakespeare’s greatest work, the power surges through every scene. The timeless tale of murder, corruptions and revenge is reset in an opulent 19th-century world, using sprawling Blenheim Palace as Elsinore and staging much of the action in shimmering mirrored and gold-filled interiors. The energy is electrifying, due to a luminous cast. The excitement of the Bard’s words and an adventurous filmmaking style lift the story from its often shadowy ambience to fully-lit pageantry and rage.

Ok, so, on to the good stuff.  How can you be one of the lucky ones to “Own it on Blu-ray”? Starting now (Sunday, August 15); 1) Follow me on Twitter if you haven’t already. I need to be able to message you back if you win. 2) Send the following message via Twitter:  Free DVD Giveaway: Enter to Win Kenneth Branagh’s Hamlet, New on Blu-ray! http://bit.ly/cbyNil @ShakespeareGeek #BlurayHamlet 3) Two winners will be chosen by midnight (Eastern time) on Tuesday, August 17 (to coincide with the official release date).  This is a quick one, people, so don’t delay! 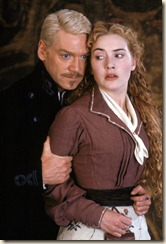 4) Winners must be in the continental United States.  Sorry, but these are sitting on my desk and I’ve got to pay the shipping out of my pocket.  I couldn’t even really tell you what region these are anyway, and I know the international folks would need to know that. 5) Your friendly neighborhood Shakespeare Geek reserves the right, if necessary, to extend or alter the rules if I’ve somehow written up a condition that is either a) impossible to fulfill or b) results in ambiguity that would wreck the integrity of the contest. Get started!  Seriously, somebody’s got to take these off my hand and then convince me to get a Blu-ray player!  I hear in high-def you can really see the melancholy in all it’s glorious detail 😉 Of course, for those that want to skip the gambling and just add to their collection, you can own it on Blu-ray anytime (well, after Tuesday) you like!