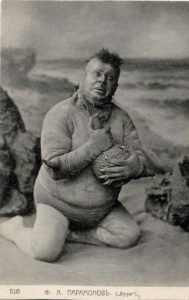 Every day I comb through Shakespeare references from social media, reddit, google… and throw out 99% of them because I’ve either seen them a thousand times before, they’re irrelevant (like Shakespeare fishing rods), or they’re just plain dumb (Shakespeare memes are on the rise, and you can thank me later for saving you from most of them).

I do this because sometimes you find a gem, like this 1960 made-for-tv Tempest starring Maurice Evans, Roddy McDowell, Lee Remick and, are you ready for this?  Richard Burton.   I start the movie wondering, “Is he playing Prospero?” Nope, too early, Maurice Evans is Prospero.  Oh, then maybe Richard Burton is Ferdinand.

Love seeing Maurice Evans, too.  For someone my age he’s probably most famous as a Batman villain, and other random supporting bit parts. Nice to see him in the lead.

I should also point out that Bardfilm was there first, back in 2009!

One thought on “A Most Mellifluous Monster”

The strong necessity of time commands our services a while.