That’s what my 3yr old asked me this morning while I was getting ready to go to work. 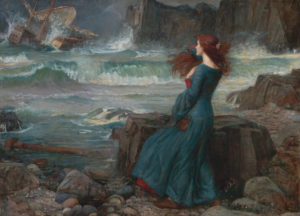 The thing is, the book was King Lear. More specifically, it was one of the comic versions of Shakespeare that I have.  I also have The Tempest as I’ve mentioned, Taming of the Shrew, and Romeo and Juliet. In general I have refused to actually read them the story of King Lear, as we don’t do that degree of violence in my house (hence my emphasis on the non-violent Tempest).

But she does like to look at the pictures.  So there she sat, doing her morning business, flipping through the pages.  Like any 3yr old she was also carrying around what if she were a boy I would call “action figures” – small statues of her favorite Disney princesses, including Belle and Ariel.

“Her name is Cordelia,” my daughter tells me, pointing at the Belle figure.    Then she points to the cover of the book and asks, “Is that Cordelia with the red hair?”

I look at the cover and sure enough, Cordelia is in fact the one with the red hair.  “That is Cordelia,” I tell her.  “And those are her sisters, Regan and Goneril.”

I think I reached her limit, though, as I never heard the names of the evil sisters mentioned.  She did go off playing, speaking of Cordelia’s friends Jossa, Brak and Ryda, which I thought was rather unusual.  At first I thought she was getting in to the imaginary friends stage (her older sister’s imaginary friends were named Cartlyn, Neejin and Lonoze).  But then I wondered if maybe hearing all the weird names in Shakespeare that she hears nowhere else, she’s tuned to thinking that names can in fact be any stream of sound, and not just repetition of the same names she’s heard over and over again.

Let no such man be trusted.