The Tragedy of Othello, the Moor of Venice actually opens with Iago and Roderigo discussing this exact subject, though the audience does not yet realize the subject of their conversation:

Roderigo. Thou told’st me thou didst hold him in thy hate.

Iago. Despise me, if I do not.

Iago goes on to offer several reasons why he hates this person, whoever this person is.

…Three great ones of the city,
In personal suit to make me his lieutenant,
Off-capp’d to him: …and, by the faith of man,
I know my price, I am worth no worse a place:
But he; as loving his own pride and purposes,
Evades them, with a bombast circumstance
Horribly stuff’d with epithets of war;
And, in conclusion,
Nonsuits my mediators; for, ‘Certes,’ says he,
‘I have already chose my officer.’
And what was he?
Forsooth, a great arithmetician,
One Michael Cassio, a Florentine,
A fellow almost damn’d in a fair wife;
That never set a squadron in the field,
Nor the division of a battle knows
More than a spinster; unless the bookish theoric,
Wherein the toged consuls can propose
As masterly as he: mere prattle, without practise,
Is all his soldiership. But he, sir, had the election:
And I, of whom his eyes had seen the proof
At Rhodes, at Cyprus and on other grounds
Christian and heathen, must be be-lee’d and calm’d
By debitor and creditor: this counter-caster,
He, in good time, must his lieutenant be,
And I—God bless the mark!—his Moorship’s ancient. 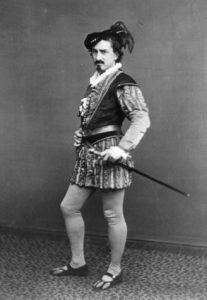 What does that all mean? Iago was lobbying for the lieutenant’s position under Othello (“his Moorship”) and even had some high-powered citizens/politicians (“great ones of the city”) go and offer their personal recommendation, only to find that Othello had already chosen Michael Cassio. Iago is not happy with this decision, and has nothing good to say of Cassio, who has no battle experience (as Iago does), and is instead what today might be called “book smart.”

But! Is this the real reason? Or is this just the reason that Iago is feeding Roderigo? At the close of Act 1, alone on stage, Iago reveals a deeper reason for his hatred:

…I hate the Moor:
And it is thought abroad, that ‘twixt my sheets
He has done my office: I know not if’t be true;
But I, for mere suspicion in that kind,
Will do as if for surety.

“Twixt my sheets done my office” is a polite way of saying, “Slept with my wife.” Iago even admits to not knowing if it is true, but doesn’t care.

So, again, is this the reason? Or is this again another justification for something deeper? This sounds more like he’s preparing an alibi, in case he ultimately needs one.

Does it go back to the racist thing? Maybe Iago doesn’t even want the lieutenant’s job, maybe he’s furious that Othello is in charge at all? He’s not shy about hurling racial epithets at Desdemona’s father in Act 1, Scene 1:

Iago. ‘Zounds, sir, you’re robb’d; for shame, put on
your gown;
Your heart is burst, you have lost half your soul;
Even now, now, very now, an old black ram
Is topping your white ewe. Arise, arise;
Awake the snorting citizens with the bell,
Or else the devil will make a grandsire of you:
Arise, I say.

…Because we come to
do you service and you think we are ruffians, you’ll
have your daughter covered with a Barbary horse;
you’ll have your nephews neigh to you; you’ll have
coursers for cousins and gennets for germans.

Twice he refers to Othello as an animal (along with the associated suggestions of bestiality) and once as the devil.

But, again – maybe he’s just saying these things because he knows that they will upset Desdemona’s father Brabantio?

Maybe it’s none of these things. Maybe Iago is a sociopath who truly has no specific reason for his hatred of Othello. That’s what makes this character one of Shakespeare’s greatest creations. Every actor must decide for himself the source of Iago’s motivation. Maybe we can never truly know because there just isn’t a single right answer.