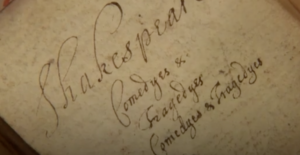 Perhaps you saw the headline about an episode of Antiques Roadshow where someone brought in a small notepad of handwritten notes about Shakespeare’s work. And, like many of us, you may have noted the story went around on April 1 and thought, “I’m not going to get my hopes up if this is an April Fool’s Joke.”

Well the episode has aired, and if it’s a joke it’s a very anti-climactic one because they’re playing it straight. It’s quite possible that this is indeed a new discovery, which would be fascinating indeed.  The cover sheet says “The Comedyes & Tragedyes” as if it’s a deliberate collection. So is the person reading them, and copying out notes and quotes? Or is it notes on various performances the owner attended?

My first thought was, isn’t that the modern spelling of Shakespeare’s name? Is that clue to a fake? But apparently even though that was not the most common way that Shakespeare spelled his name, it is the most commonly used variant at the time.

Then I thought, oh god why are you touching it with your fingers? Put some gloves on, man!

Then, if you’re with me, you’ll pause on every close up of the text and see if you can spot some quotes.  I found what looked like “enough to make all fellowships,” which is Vincentio in Measure for Measure:

How cool is that? I could do that all day.  I’m not worried at all about them saying it’s illegible – there are scholars trained in how to read that hand.

Showing this to my coworker I spotted another one. “Doesn’t that look like it says “heap on your head a packet of sorrows?” I asked him, then flipped to my Open Source Shakespeare:

Than, by concealing it, heap on your head
A pack of sorrows which would press you down,
Being unprevented, to your timeless grave.

(Reading up on what people smarter than me are saying I guess it’s not all *that* rare, we do have plenty of examples of commonplace books from the time period.  So this is not a “never before seen” type of situation. But still, everybody seems in general agreement that it’s a big deal because it’s a new thing, with new information, and everybody wants to see what’s in it.  Me too!)

Love sought is good, but given unsought is better.