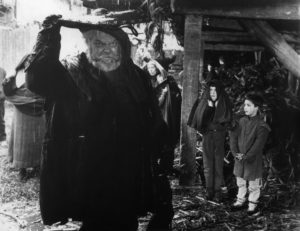 I haven’t been around much lately, and for that I apologize.  I’ve missed a few big stories that I hope to come back around to as part of the year end.

One of those is finally getting to watch The King, an adaptation (?) of Henry V now playing on Netflix and starring Timothée Chalamet as Henry and Robert Pattinson as a psychotic Dauphin, among others.

My ability to watch and appreciate these movies for review is limited.  The only time I’ll get to watch is when the family is safely stowed away for the night, because they don’t want to watch, and I can’t concentrate when I’m getting pulled in various homework directions.  But then during those limited hours I’m typically trying to do several other important things, so the best that I’m going to be able to spare for a movie I don’t really care to watch is “put  it on in the  background while I sit at the laptop.”  For  bonus points I’ll  use closed captions so I don’t have to keep saying “What did he say?”  (Compare to Branagh’s All Is True, which the whole family sat and watched through, uninterrupted.)

So, on to our story.  I’ll admit to not knowing the Henriad story as much as some of Shakespeare’s other plays, so I really have no idea where this one just invents stuff out of whole cloth (for the most part — you’ll see).  We open with Hotspur doing his rebellion thing, leading to the king chosing Hal’s brother Thomas to be the next king and do something about it. Cut to the battlefield where Hal challenges Hotspur to one-on-one battle instead, beating him, and causing a hissy fit from Thomas who screams that his brother stole this victory from him.  This doesn’t last long, as Thomas goes off and gets killed and Hal ends up king anyway.

What of Falstaff? Of course there’s a Falstaff.  But here’s the thing right away – Falstaff looks like he’s maybe ten years older than Hal?  He doesn’t look remotely like a father figure, he looks like one of those guys that graduated college right as you got there and then just kind of hangs around with the young people because he’s got no ambition to do otherwise.  Falstaff roams around doing his Falstaff thing, not paying his bar bill and whatnot, until he hears that Hal has been appointed king.

And then we get my favorite scene, the wonderfully sad “I know thee not,  old man…” scene…..only no wait, we don’t.  At all. Falstaff is appointed to join Hal’s council as one of his trusted war tacticians. Huh?

Cut to France. It’s complicated, but we all know the story ends up in France. That’s where we meet Robert Pattinson’s psychotic Dauphin, who has literally come to meet Hal and tell him that he’s basically going to torture him until he goes home.  There’s even a scene right out of a horror movie where Dauphin and his men, skulking about in the woods around Hal’s camp, send one of the children (why did he bring children??) back to camp with a sign for Hal — the head of one of the other children.  Charming.

Everything builds to Agincourt.  We knew it would. The most entertaining part to me was a nod to the expectation of a big speech moment where Hal basically screams at the men,  “You’re probably expecting a big speech right now!”  And then goes on to give a reasonably modern version of “We’re all going to die someday.”

There’s more to it, but I don’t want to spoil the whole movie in case people want to watch. I found it reasonably violent, but not in a Fassbender’s Macbeth way.  There’s a beheading (in a god awful special effects scene), and one poor dude gets stabbed in the *top* of the head in a scene that made me cringe.  Aim for the soft bits, man!  Ouch!

As with most of these movies the bits of dialogue where people are trying to sound like Shakespeare are painful to the ear. The battles are brutal,  muddy and bloody. I don’t know that I can say it was bad.  It’s more like, ok, somebody made a movie that used Henry as a structure and then kind of did their own thing with it. That’s not a sin.  If you swapped it for Romeo and Juliet that’s basically the plot of many, many movies. I think Falstaff probably had the best character arc. There’s one particular scene, and one particular expression on his face, that makes me wish I was paying closer attention (see opening notes) and maybe want to go back and follow his arc closer.  Just because they gave him a new story doesn’t mean we can’t imagine he’s the same character.

2 thoughts on “Review : The King on Netflix”

Love looks not with the eyes, but with the mind; And therefore is winged Cupid painted blind.