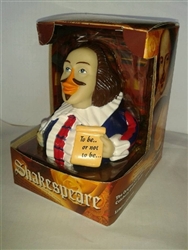 What came first, Shakespeare or duck jokes?  Our favorite playwright may have invented the “knock knock” joke as well as the “yo mama” joke, but we’re having trouble coming finding any duck jokes in the First Folio (although we do learn that Trinculo can swim like one).

So, Bardfilm and I decided to help out.  We’ve done chicken crossing the road jokes, light bulb jokes, knock knock jokes … it was only a matter of time, wasn’t it?  It’s time for

Thanks as always to Bardfilm, the Hardy to my Laurel, the Curly to my Larry, the Lewis to my Martin, the Kermit to my Fozzie Bear.

2 thoughts on “A Duck Walks Into A Bard”