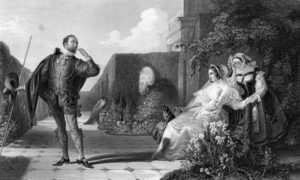 Over the centuries it’s been common practice to spin a happy ending on Shakespeare’s tragedies.  Romeo and Juliet live, King Lear and Cordelia live happily ever after.

What if you went the other way? The comedies are known for their happy endings.  Can you spin your favorite comedy and give it a dark ending?

Twelfth Night is the obvious choice, with Malvolio’s ominous, “I’ll be revenged on the whole pack of you!”  How does he not show up at the wedding with an AR-15?

How about A Midsummer Night’s Dream?  The lovers wake up, the love potion has now worn off Demetrius, who sees Theseus and Egeus and immediately goes right back to the character he was in the first scene.  Seeing no change in anybody’s feelings on the matter and with Hermia refusing to budge, Theseus has her executed.  I was going to write that Lysander tries to protect her and gets executed for his trouble as well, but it’s more fun if he’s a coward who absolutely doesn’t do that. 🙂

Can we count The Tempest?  I know, not technically.  But it’s so easy to envision the entire play as the ravings of a poor old man alone on an island making up the whole thing.

Anybody else want to take a shot at going dark?