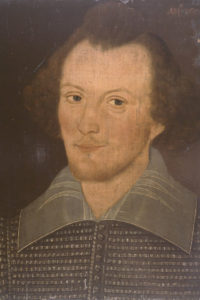 Or so Sir Anthony Sher and Professor Sir Jonathan Bate would suggest, according to this article.

Perhaps it’s autobiographical? Perhaps Shakespeare had something against women?

Hey you know, in the sonnets he mentions mercury baths, and that’s where people went when you had syphilis.

Yeah, yeah!  And another thing, he wasn’t seen around the king very much, and there was a law that if you had syphilis you couldn’t be anywhere near the king!

They then play connect the dots and suggest that if he had syphilis, he got it from a woman, and therefore had some degree of resentment there.

I think my favorite part of the article (and please take that with a heavy, sarcastic eye roll) is where they mention “Oh yeah, and then there’s that thing where Shakespeare might be gay. Which doesn’t mean that he was anti-women, but, you know, I’m just sayin’.”

So confused.  If you give any credit to the theory that he was gay, then doesn’t that completely destroy everything else you’ve said in the article?  “Shakespeare said misogynistic stuff so maybe he hated women because a woman gave him a venereal disease. Or maybe he was gay, which wouldn’t have anything to do with why he hated women.”  THEN IF YOU THINK HE’S GAY WHY DID HE HATE WOMEN? AND IF YOU DON’T THINK HE’S GAY WHY DID YOU BRING IT UP?

Anybody else pulling their hair out on this one?  Careful though, they say that losing your hair was also a sign of syphilis.

My heart unto yours is knit
So that but one heart we can make of it;
Two bosoms interchained with an oath;
So then two bosoms and a single troth.