Unfortunately the JAMA article linked in this Washington Post piece about Shakespeare’s medical knowledge is available only to AMA members, so I’m left linking a link of a link :(.

The article points to a piece from the “100 Years Ago” department that ponders how Shakespeare acquired his “extensive knowledge of medical matters.”  Deniers will, of course, tell you that this very sentence is prove that Stratford Will could not have written the plays because he was not a doctor, and we should be seeking out the medical professional who did write them.  (I heard that Oxford once successfully put a Band-Aid onto the pinky finger of his left hand, however.  So he’s still in the running.)

But Shakespeare did know his mental illnesses. The article notes that in his day, mentally ill people weren’t locked away in institutions. Shakespeare could train his powers of observation on people suffering all manner of mental disorders without going out of his way to encounter them.

It’s interesting to periodically step away and look at the words from this “100 years ago” perspective.  We’re so used to what Freud told us about Hamlet that we rarely stop to differentiate what Shakespeare couldn’t possibly have been trying to say (because the very concepts did not exist yet), from what he really was trying to say that we’re not seeing because we fail to look at what he gave us from his own terms.  Would Shakespeare have had a name for the behaviors that he gave to Ophelia? Was he describing what he’d personally seen in someone else?

Since Freud comes so much re: Hamlet, I’ve often wondered what other modern psycho/socio creations we have today that Shakespeare might have been showing us, in his own way.  Does Hamlet, for example, go through the “five stages or grief”? Do any of his characters suffer from textbook schizophrenia?  In my review of Tennant’s Hamlet earlier today I deliberately made reference to Asperger’s (and, on Twitter, ADHD) to see if anybody with more knowledge of those subjects would pick up on the thread. 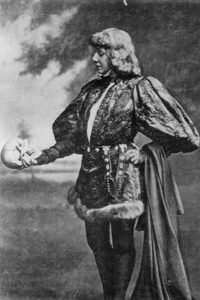 You know what just occurred to me?  I don’t recall seeing a single peanut in any of Shakespeare’s works.  Perhaps Shakespeare was suggesting that Hamlet was allergic?  More importantly could he have found a rhyme for “epi pen” while still getting the meter to come out right?

We are all made of dream stuff.