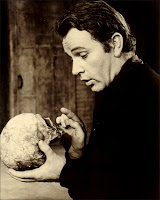 Ok, here we go!  The easiest way to review Hamlet, I’ve found, is to break it into three distinct reviews : the direction, the rest of the cast, and Hamlet himself.  Otherwise it’s just too hard to separate what David Tennant did with what he was given to work with. Let me just first say that watching Shakespeare on “live” TV as if it were some sort of major event was just awesome.  It was this wonderful combination of nostalgia (remember the days before DVR where if you got up to go to the bathroom you missed stuff?) with modern technology – I sat on Twitter and did play-by-play throughout most of the show.  Could I have DVR’d it?  Sure, and I did, kind  of — I was running maybe 45 minutes behind everybody else.  But it was important to me to watch it as live as I could, as if we were watching the Academy Awards or something.  I wanted to share the experience with my geeks.  Great time, and I look forward to what PBS has in store for us next time.

First, the direction.  I think I’ll call this the WTF? Hamlet, because it had more WTF moments per scene than any production I can remember.  Parts were cool, like how the opening scene is shot from the ghost’s point of view.  We’re not even going to see the ghost? That’s a neat way to do it.  But then … here’s the ghost, standing among everybody.  And oh look, it’s Patrick Stewart.  WTF? He doesn’t look like a ghost.  At all. He looks, as I wrote on Twitter at the time, like he’s just walked out of a first-person shooter video game. That was weird.  Later, Stewart’s ghost physically interacts with Hamlet.  Grabs him, hugs him.  WTF, again?

Much of the movie is shot as if through the eyes of security cameras.  I saw this done once before in a Macbeth production, done up as if they were all drug dealers.  It was interesting there, increasing the general paranoia of a man who thought everybody was his enemy, even if they had to come back from the dead to get him.  Here it’s … interesting, but I’m not fully sure what the point was.  The cameras move and track, as if somebody is controlling them.  But who?  In the most obvious scene, where Claudius and Polonius are spying on Hamlet and Ophelia, they are hidden behind a two way mirror.  Yet in a very key moment, the cameras move.  So, who moved them?  Hamlet will often look directly at them, and at one point rips one out of the wall.  But was that the whole point, just to have him rip one out of the wall?

Last thing on the direction, otherwise I’ll go on far too long.  The actors look directly into the camera.  All the time.  Hamlet does it, Polonius does it.  I’m sure if I went back and paid closer attention I could find others doing it.  STOP THAT, it is very disconcerting.  It’s like watching The Office.  I appreciate that in a live theatre production, certain asides and soliloquies could be directed at the audience.  But there’s a difference between speaking to the audience in general, and singling out one person to talk to. When you look directly at the camera you destroy all suspension of disbelief and pull the audience back up to the “Hello there, I’m an actor on a stage doing a show for you, is it not lovely?” level.

On to the supporting cast, and by that I basically mean Patrick Stewart.  It’s a bit of a shame, really, when you have such a high powered “leading two” like this, because no one else is going to get the time of day.  If you take in a community production of Hamlet where everybody is an equal, you can appreciate the nuances of what Ophelia or even Guildenstern might bring to their role.  Here it’s all about Claudius and Hamlet, and everybody else pales in comparison.  Laertes is … goofy.  That’s the best way I can describe him.  I suppose that’s a good thing, he’s got that sort of awkward “I know what I’m supposed to do in this situation but you can tell I’m nervous about it” thing going, which makes sense.  Ophelia never gets much to work with.  I just plain didn’t buy her crazy.  Black eye make up doesn’t make you crazy, it makes you look like one of the kids from Mad Max Beyond Thunderdome.  In a weird directorial choice, crazy apparently does mean stripping near naked (not sure if she went the full monty on the live show) in front of the king before running off.  I say weird choice, because in the next scene don’t we learn that she drowned precisely because her heavy clothing got soaked and pulled her down? She doesn’t go skinny-dipping in the First Folio, I don’t believe. 🙂  Polonius is…irritating.  He’s often played for comedy, but here he’s more annoying than anything else.  In a good way.  The supporting cast around him, tolerating him, are the funny ones.  But this is a Polonius where you just know that you’d not want to be in the room, stuck waiting for him to finish his sentence.

Can we talk Patrick Stewart? He is, for most of the play, the … coolest … Claudius you’ll see.  He’s awesome.  He’s got the throne, he’s got the queen, he’s got everything well in hand and he knows it.  Calm, cool, collected.  He’s exactly the kind of king who, after Hamlet kills Polonius, has his thugs tie Hamlet to a chair down in the soundproof basement before coming down, taking off his jacket, rolling up his sleeves …  they don’t end up going for any sort of interrogation/torture sequence, but they well could have.  It would have been in character, and would have been very impressive.  I wouldn’t have expected Claudius to do any of the dirty work, but he’d have no trouble having his goons do it.

The ghost in the queen’s bedroom, by the way, was excellent.  I hated the ghost at the beginning, but in the second coming he’s done quite well.  This is actually a credit to the direction, not so much the acting, as it’s all about the camera work and whether we’re looking at the scene through Gertrude’s eyes, or Hamlet’s.

But then….  see, I can’t spoil things for people that haven’t seen it.  All I can say is that there’s a moment when you’ll stare aghast at your screen and mutter a disbelieving “Oh, Patrick…no…oh, no…..”  I can only hope for the love of all that is good and Shakespeare in the world that what happens in that moment was purely a director’s choice and that Stewart was forced to do it against his will.  It is the biggest WTF moment in a movie full of them.

Ok, now let’s talk about Dr. Who.  I’ve honestly never seen Dr. Who, none of them, so I come to David Tennant’s performance with no preconceptions.  To me the man is Barty Crouch from the Harry Potter movie.

What’s up with this dude’s eyes?  He always, always looks like he’s got some sort of psycho-stare going.  This works later in the play, of course, but it’s very offputting in the beginning.  He actually does something very annoying in the opening scenes in that he makes no eye contact with anyone.  Asperger’s? Later when speaking with Horatio it seems like he does the opposite, getting well up into his friend’s personal space for no good reason.  I think that this was a deliberate choice, and it’s what makes me give this review the headline that I did.  He’s playing up the nerd aspect.  We all know that Hamlet is the smart kid who’s been away at school.   Why shouldn’t he have some social adjustment difficulties?

David Tennant plays Hamlet as crazy.  Simply put.  Before he ever sees the ghost, he’s got issues.  After the fact he’s full on lunatic.  Which gets very weird, because he’s looking you in the eye and he’s telling you, “I’m not crazy, I’m just acting this way.”  There are parts when it ends up making him look like an insufferable ass, like a spoiled child who’s not gotten his way and is now throwing a gigantic tantrum up and down the palace while everybody tries to humor him.   This ends up being what I have the most trouble with.  It’s like he took the job just so he’d get to do his crazy act.  He’s practically Jim Carrey in some scenes, and that’s not a good thing in a Shakespearean tragedy.

Don’t get me wrong, the man’s a good actor, and I’ll speak more on this in a minute.  There are moments, even the briefest, where it is entirely the acting that gets across what’s happened, without the backing text.  When Laertes gets in his cheap shot and Hamlet realizes that he’s been using a sharpened foil, Tennant’s “Nay, come again!” is very clearly, as I wrote on Twitter, him really saying, “Oh you mother f%^&*ing son-of-a%^”.  You have to see it.  He realizes, not that he’s been poisoned, but simply that Laertes is essentially cheating, trying to hurt him.  And his instant reaction is, less colloquially, “Now, see, that pisses me off.  Ok, punk, you want to play like that? Well I have the pointy stick now, let’s see how you like it.”  Coupling such a moment with the earlier depiction of “nerd” Hamlet brings things full circle rather nicely.  Throughout the play we’ve had a very non-threatening Hamlet, someone who clearly thinks he’s the smartest kid in the room and gets by on his wits alone because he can.  He’s never a threat to Rosencrantz and Guildenstern, and even when he’s got a chance to kill Claudius he’s too hesitant.  But here, here he’s caught off guard, he’s angry, and he’s got a weapon.  And now he lashes out.  Even the nerdiest nerd will, pushed to his limits, throw that haymaker punch that knocks the bully out.

Ok, here’s my overall summary of David Tennant as Hamlet.  This is a story that happens to be Shakespeare, not a Shakespeare story.  The stars here are the actors, not the words.  It’s not just David Tennant, either – I mentioned on Twitter that Laertes gets in his own “you can tell what I meant whether you understood the words or not” moment when he first sees Ophelia enter.  If you took this whole movie and rewrote all the dialogue like you might normally write an action/drama movie? You’d have the same movie.  Tennant doesn’t need to be speaking Shakespeare’s words to act out his Hamlet.  He just happens to be doing that.

See what I mean?  I don’t think this is a bad thing, I think it’s an important thing.  Hanging out last night while it played I noticed two very different camps.  There were the Shakespeare fans who were hesitant, at best, about Tennant’s performance.  But then there were the Tennant fans who thought he killed it, and actually made Shakespeare interesting.  I think that’s the crucial distinction.  This movie was more for them than for us.  We Shakespeare geeks can go debate how he delivered the third soliloquy, but the Dr. Who geeks are going to go and debate how he *behaved* during the Mousetrap scene.  They want to talk about him, and his acting, and Shakespeare is secondary.  If we want to talk about the Shakespeare first and the actor is secondary, we can do that too.  But neither group is going to be more right than the other.

(Didn’t love my review? JM has his own take on this one over at The Shakespeare Place.)

20 thoughts on “Review : David Tennant as Hamlet, Nerd of Denmark”