Ok, remember a few weeks ago when we spoke of Hamlet, the Indie Game?  At the time I thought it was new, but a little searching shows me that I’d seen it coming back in Sept 2009! Anyway, I’m happy to announce the Hamlet is now available from Alawar Games.  They were nice enough to send me a copy for review, and while I’ve not yet finished it, I think I can at least give people a taste of what to expect.

As far as Shakespeare content goes, hardcore geeks will likely be disappointed.  The connection to Hamlet seems to be in name only, as the plot line quickly reveals : Polonius wants his daughter Ophelia to marry Claudius, and Hamlet must save her.  Only problem is that you in your time travelling spaceship have crash landed onto poor Hamlet, and now you must rescue Ophelia.  From her dad.  So that she doesn’t have to marry…Hamlet’s dad? Exactly.  As I play each level I’m looking for Shakespeare jokes (as the password to Polonius’ lair I guessed “Corambis” :)), but I’m not finding too many.   At this point, unles 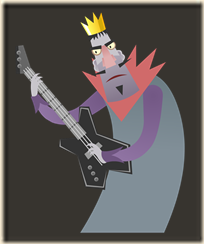 s something suddenly changes in later levels (maybe a jealous Gertrude will make an appearance?), this could just be a generic “save the princess from the bad guys” story.  But I’ll take such a game with Shakespeare characters over one without, anyway.   Though I’ve not met them yet I can see from the materials that a number of other characters make guest appearances. The game itself is a logic puzzle where to move past each screen (each portion of the story) you must find the things that are  clickable, and how to click them in the right order to unlock whatever needs unlocking.  Sometimes this is easy (the bird drops the seed, the rain makes the seed grow into a vine to be climbed…) while other times it is quite difficult (“Ok, guess the password now.”)  There are hints for each level including what your character thinks (this is very important, always check this), clues hidden on the page itself, and another hint that you will earn if it takes you too long to solve the level. I’m currently stuck on a puzzle that is all about the hand eye coordination, and it is a little frustrating.  I usually work off of a Thinkpad stationed on my lap, using the touchpad instead of a mouse.  In this particular puzzle I have to hit several small targets very quickly, and I’m not doing so well at it.  The implemention of the game is very good.  It offers both full screen and windowed modes, and is nice enough in windowed mode to do things like turn off the sound and the timer when you are not playing.  Excellent.  The sound and graphics are very good, not blow-you-away like a 3D shooter would, but very consistent for the world view they’re trying to create.  Quite a large world it is, too.  Sometimes you’re outside, sometimes underwater, sometimes on a …spaceship?  You’ll interact with other characters, too, so don’t worry about this being a quiet little mouse clicker.  Stuff is definitely moving out from under you. Sometimes stuff is trying to shoot at you, too.

It reminds me a little bit of Fool’s Errand, if anybody remembers that classic puzzle game.  You get a screen, you know you have to do *something* to get past that screen, and each screen is pretty much 100% different from the previous screen.  Now you’re on your own.  Unlike Fool’s Errand it is entirely linear, so if you get stuck on a level (as I am, currently) you don’t have many options other than to stick with it. The demo lets you play for an hour, so see how far you get.  I played for more than an hour on my review copy and only got through maybe 5 levels, and I’m told there are 25 in the game.  And hey, at $9.95 for the full version it’s not a bad deal to add this one to your collection and say you’ve played  the Hamlet game.