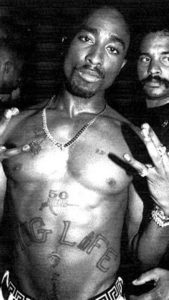 No, he’s not back, he’s still dead.  Maybe he’s got a new album coming out, you can never tell.

I’m talking about Tupac Shakur’s interview in the LA Times back in 1995, where he drops a bunch of Shakespeare stuff.  I probably heard about this and never paid close attention – I never really knew anything about his work when he was alive, so I have no opinion on the man.  I think I basically assumed that he was just being subjected to the “modern Shakespeare” treatment as idol worship after his death.

Here’s the actual snip from the article.  Man’s more articulate than I thought (though maybe articulate isn’t the right word):

Q: You studied at the Baltimore School of Performing Arts. Does your theater background influence your songwriting?

A: It influences all my work. I really like stuff like “Les Miserables” and “Gospel at Colonus.” And I love Shakespeare. He wrote some of the rawest stories, man. I mean look at Romeo and Juliet. That’s some serious ghetto [expletive]. You got this guy Romeo from the Bloods who falls for Juliet, a female from the Crips, and everybody in both gangs are against them. So they have to sneak out and they end up dead for nothing. Real tragic stuff.

And look how Shakespeare busts it up with Macbeth. He creates a tale about this king’s wife who convinces a happy man to chase after her and kill her husband so he can take over the country. After he commits the murder, the dude starts having delusions just like in a Scarface song. I mean the king’s wife just screws this guy’s whole life up for nothing. Now that’s what I call a b—-.

I just realized that I don’t think he completely understands Macbeth (kill whose husband, exactly?) but I appreciate the effort.

So, here’s a question for those of you who know Tupac’s work better than I.  Does he have any overt literary / Shakespeare references that we should be looking at?  I’m figuring that if they were there and obvious I probably would have run across them by now, but you never know.  I’m open to learning more!

3 thoughts on “Tupac on Shakespeare”

Two stars keep not their motion in one sphere.