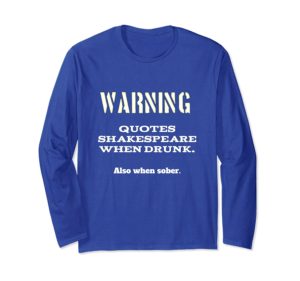 If I said to you the subject is drinking in Shakespeare’s play, where does your brain go?  Falstaff, probably.  Maybe the Porter in Macbeth, Claudius in Hamlet, or poor Cassius in Othello.

The Guardian would like us to consider Antony & Cleopatra. In this article about the greatest drinking scenes in literature, Shakespeare makes the list with Antony trying to explain a crocodile to Lepidus:

What manner o’ thing is your crocodile?

It is shaped, sir, like itself; and it is as broad
as it hath breadth: it is just so high as it is,
and moves with its own organs: it lives by that
which nourisheth it; and the elements once out of
it, it transmigrates.

What colour is it of?

Of it own colour too.

A&C doesn’t get much love, that I can see.  We rarely quote it or reference its plot lines.  Hardly anybody reads it at school. And when’s the last time you saw it performed?  I wonder why that is? I can’t say I’m terribly familiar with it, having little more than “I read it once, back in college, when I read all the plays” experience with it.  I’ve always heard that it’s problem is that it is too big to stage. Thus, fewer people get to see it, and it propagates down the line. People who’ve never seen it don’t tend to talk about it, or recommend it, etc…