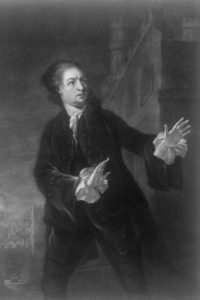 An argument can be made that were it not for David Garrick‘s Shakespeare Jubilee in 1769, none of us would be here today singing Mr. Shakespeare’s praises. Speaking of singing, much of the music from the celebration found its way into Garrick’s The Jubilee, staged later that year and running for 90 performances.

Have you ever heard it? Neither have I.  Retrospect Opera, a small UK charity that makes professional recordings of important musical theatre works from Britain’s past, would like to change that.

Although the Jubilee is a seminal moment in Shakespeare’s reception history, and marked the consecration of Stratford-upon-Avon as a centre for literary pilgrimages, most of the music – which is consistently fresh and delightful – has never been recorded before. We want to create something that is at once scholarly, with appropriate supporting documentation, and musically and theatrically done to the highest level, capturing how much fun it all was.

They are currently fundraising and looking for backers to help see them over the finish line. Stephen Greenblatt and Jonathan Bate have already endorsed the project.
If you would like to donate to this project, you can use this link.