One of my favorite puns in all of Shakespeare can be found in this exchange between Hamlet and Polonius:

HAMLET
‘Tis well: I’ll have thee speak out the rest soon.
Good my lord, will you see the players well
bestowed? Do you hear, let them be well used; for
they are the abstract and brief chronicles of the
time: after your death you were better have a bad
epitaph than their ill report while you live.

LORD POLONIUS
My lord, I will use them according to their desert.

HAMLET
God’s bodykins, man, much better: use every man
after his desert, and who should ‘scape whipping?

I love it.  Hamlet tells Polonius to treat the players well. Polonius responds that he will treat them as well as they deserve.  Hamlet says that if he were to do that, no man would escape the whip.  But the last line can also be read as a play on “dessert”, making “whipping” a play on whipped cream or some other confectionary treat.

Except that it’s not a pun at all. I have been informed by numerous sources that the term “dessert” did not exist for Shakespeare (first published in 1633 according to the OED).  Likewise, “whipping” in reference to confectionary, as in a whipped topping or whipped cream, not until the 1800s.

I really wanted this pun to work.  I even did my own research, coming across this recipe for a “dishful of snow”, which is basically whipped egg whites and sugar: 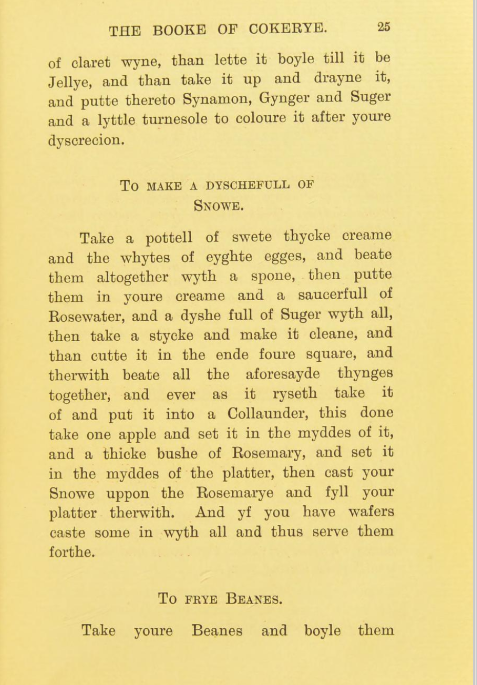 Alas, I have to admit that this is in no way called a dessert, nor does it say to whip anything.  Oh well.  I was actually informed that if Shakespeare was thinking about what we know as dessert, he was probably thinking of something more in line with, “eel baked in Marchpane or lamprey roasted in a sweetened sauce made of its own blood.”  Go ahead and think about putting whipped cream on that!

Anyway, what’s your favorite pun of Shakespeare’s?  I’ll leave you with another favorite that nobody has yet spoiled for me. This one from Two Gentlemen of Verona:

2 thoughts on “No Pun Intended”