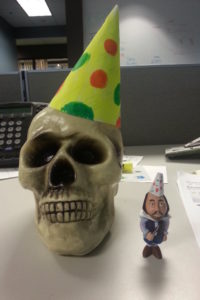 In marketing my merchandise I’ve often noted that “the dream” is to randomly bump into somebody wearing one of my t-shirts, because I’ll know I’ve found a kindred spirit. This week I learned to always have my eyes open because kindred spirits are all around.

My oldest geeklet was inducted into her school’s chapter of the National Honor Society last night.  It was held in the school chapel. It just so happens that their chapter coordinator is also her Shakespeare teacher.  Here, to the best of my ability to recap it, is her welcome speech:

“This being Boston, I did hear on the radio that there’s some kind of important game on television tonight.” <pause for cheers from the audience> “The Bruins are in the playoffs, and game seven sounds exciting.”  <more cheers> “I don’t follow sports, but I do have my own personal reasons for celebrating, because today is also Shakespeare’s Birthday.”

And that, if you can believe it, marks the very first time on a Shakespeare Day I’ve been in the room with a third party who, entirely independent of me, brings it up.

So I did what I always told myself I hoped I’d do.  I threw both hands up in the air and yelled, “WOOO!”  She pointed at me from her lectern and smiled.  I believe there were some cheers for Shakespeare but honestly I can’t remember, I was having too much an “Ok, I can’t believe I just did that” moment 🙂

After the ceremony at the reception, she did come up to me and say, “Thanks for having my back on the Shakespeare thing.”  I told her that was the only celebration of Shakespeare Day I had this year. We then started talking about the ending of Othello – or, rather, I started talking about the ending of Othello while my wife pulled me away and let her sit down and talk to her fiancé.

That’s also something I’ve told people many times — if I start talking about Shakespeare, just go ahead and walk away at some point, because I’m not going to stop. 🙂