A hip-hop Romeo and Juliet? Produced by Queen Latifah and Will Smith?  Coming soon to Netflix? Tell me more!

The movie will set Shakespeare’s tragedy in contemporary New York and follows a Brooklyn waitress and a musician from wealthy family.

Oh, so, West Side Story. I think it’s crazy difficult to do an “adaptation” of Romeo and Juliet because the expectation scale is so out of whack.  Beyond “two people in love who can’t be together,” what exactly are the required elements before we care about this one, and it’s not just another Camp Rock 2 or Gnomeo and  Juliet? Does there have to be a Mercutio? A Tybalt? A sleeping potion, a Friar Laurence?

Something that’s often forgotten in modern Romeo and Juliet adaptations is where Shakespeare says, right there in the first line, “Two households, both alike in dignity…”  Shakespeare never said “worlds apart” or “from different sides of the tracks” or made them two different religions or races or socio-economic classes (althoug 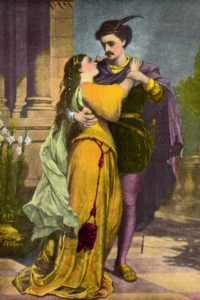 h I’ve heard it argued that the Capulets were much better off than the Montagues).  I don’t think modern audiences want to do the extra brain work of keeping track of who is on Romeo’s side and who is on Juliet’s.  “Can’t you dress them all a certain way so I can tell by looking at them?”

This is very midsummer madness.