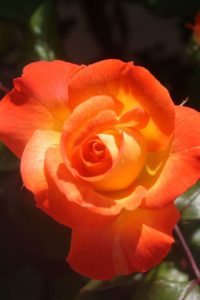 Months ago I was lamenting the quality of my daughter’s Shakespeare education as she pored over the Queen Mab speech of Romeo and Juliet, panicked that she had not memorized minuscule details like what kind of nut she made her chariot out of.

Last week this conversation took place during a random drive.

Me: <something something about a person named Gregory.>

Middle geeklet: “Like the opening of Romeo and Juliet!”

Middle geeklet: “And Sampson! And Abraham!”

Me: “Wow.  Do you remember the last one?  Two from each side? This one’s tricky, he doesn’t even get any lines. But he’s the only one that shows up again in the play.”

Me: “Amazing.  Do you remember what else he does in the play?”

Me: “Correct! If you think about it, the whole thing is really his fault. Because if he didn’t say anything to Romeo, then eventually Romeo gets Friar Laurence’s note, and there’s no misunderstanding.  I blame Balthasar.”

Not bad for a middle of summer pop quiz!

(I think it’s also only fair to point out that her older sister, who was busy being the rockstar of her own Shakespeare class, was in the car during this exchange and did not immediately recall those answers.)

No profit grows where is no pleasure ta’en. In brief, sir, study what you most effect.