Show of hands, does it annoy anybody else that you can walk into half a dozen stores in the mall these days and see a wall of “Funko Pop” characters from practically every television show that’s had even a hint of an audience, and yet, as far as I’ve been able to tell, not a single character from classic literature? I want my Shakespeare!  I have a growing army of Shakespeare figurines slowly taking over my desk, and I always want more.

So I was very excited when the folks at Jackiz Studio reached out to let me know about their Shakespeare Figurine Kickstarter! 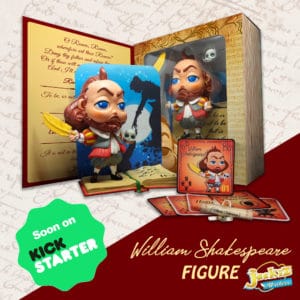 Ain’t he precious? The artistic interpretation is a little unique, I’m not going to lie. But I’m looking at him like I’d look at a newborn baby.  Do you look at the baby and say, “Whoa, yikes, what’s up with that hair?”  Nope.  You love it.  It didn’t exist, and now it does, and the world is a little bit better because of it, and who cares about the hair.

This Kickstarter just started (they contacted me to help kick it off) so there’s plenty of time to get in on it while all the backer rewards are still available.  They’re hoping to reach their stretch goals and even make an accompanying card game and mobile app, but what I think is the best one is a golden figurine which I think looks even cooler than the original.  (I’ve got to get back in touch with them and ask for clarification on what exactly “golden” means, just so we’re clear that people don’t think they’re getting a solid gold Shakespeare!)

Let’s make this one happen, people.  Tell your family, tell your friends.  Every Shakespeare Geek needs more stuff like this on their desk.  One success brings about more.  I’ve already planted the idea with them of doing actual Shakespeare characters, so soon we might have our own (virtual) wall where we can pick from Romeo or Hamlet or Orsino or Rosalind…  just like I’ve always wanted 🙂

The Strangely Out of Place Coast of Bohemian Rhapsody