Back in November, I had a bit of a reality distortion moment as I found evidence that a story I’d always told as having happened in 2008 actually happened in 2004. Specifically, we’re talking about a production of The Tempest that I took my kids to see. Their first one, in fact.  The one I use as the foundation when I tell people about my kids’ relationship with Shakespeare. Only, if it happened in 2004, I only had one kid.

But I was right after all!  Looking through old pictures this weekend I found more from that production, with my other two kids clearly included.  I knew I wasn’t losing my mind.  These pictures were, in fact, dated 2008.  That gave me an idea I should have thought of in the first place.  I used my own darned search function…

And look what I found. August 2008. I actually posted about it several times both before and after the show, it was quite a milestone event for me.

Oh I feel so much better now. 🙂

For years, whenever I brag about my kids’ connection to Shakespeare, I’ve said that my son saw his first production of The Tempest while he was still in his stroller.

This weekend my daughter was going through a box of pictures and held one up, asking, “Who is this?”  I recognized the picture immediately as she had it tucked into her dressing table mirror for years.

Sorry for the quality, it’s literally a picture of a picture.  The guy in the nylon mask in the background isn’t about to rob us all, he was one of the spirits roaming the set and making noises.  This outdoor production was literally in the middle of a strip mall and people occasionally just walked right through the set.  Who cares, I loved it.  Practically guerilla Shakespeare.

“…Caliban,” I hear my wife’s voice behind me.

I was momentarily speechless.  “…Caliban.  Yes.  Really?  You remember that?”

My wife seems to think it’s no big deal.  “The Tempest.  We went down the Cape.”  For my part, whenever a beautiful woman gets one of my Shakespeare references my first reaction is almost always, “Oh, I’ve got to marry you.”  Lucky for me this time! 🙂

“Sorry,” I say to my daughter, regaining my composure.  “Just falling in love with your mother all over again.  That was the first production that we were invited to.  One of my social media followers invited me to come and we hung out with the cast afterward.  Your brother kept freaking out about Caliban, pointing and yelling, “Monster!””  I flip the picture over.  It is dated 2004 — two years before my son was born  “Whoa.  Your brother wasn’t even born when we went?  I’ve been telling that story wrong all these years?  I guess it was you in the stroller.”

My daughter considers the picture.  She notes the month.  “My birthday’s in August.  I wasn’t born yet for this picture either.”

I was completely flabbergasted.  All these years my memory was of taking three children to this production, and I only had one child at the time?  Unbelievable.

I had to share that story with everybody.  Ben Berry, now the artistic director of Peregrine Theatre Ensemble in Provincetown, MA originally extended the invitation (but that is not him in the picture).  I wonder if he’s still reading and if he remembers us?  Hi Ben! 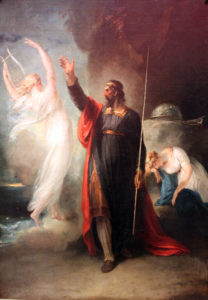 I’ve admitted on plenty of occasions that I still have a lot to learn about Shakespeare. In fact, it is when I learn something new that I am again thrown back into my love for the subject as I run to the text and visit with my old friends again.

I have always, always read the end of The Tempest as:

So it came as quite a shock last week when I was shown a line I’d never really noticed before.  As he prepares for his upcoming freedom, Ariel says:

Merrily, merrily shall I live now
Under the blossom that hangs on the bough.

And my world changed. After all their time together, Prospero frees Ariel and Ariel basically just heads off to the other side of the island?  I imagine him sitting in a hammock sipping a drink out of a coconut like something from Gilligan’s Island. He might as well have said, “I miss my cloven pine, it was a little snug but really quite comfortable once you got used to it.”

I hate that so much. That means that, for starters, Caliban is not left alone on the island as he wanted. Worse, he doesn’t even have a kingdom, because Ariel’s not about to listen to him. Ariel and Caliban hate each other. So now I envision the ending of my favorite play with Caliban trying to be left alone and Ariel, now bored silly, forever tormenting him because there’s nothing else to do.

Somebody tell me I read that wrong, and the play isn’t completely ruined for me. I really hate that ending.  My way, everybody – even Caliban – gets a happy ending.  As it should be. This way doesn’t even make any sense. Wouldn’t Ariel want to escape the island as soon as he is able? He’s been a slave here for all those years, so he’ll celebrate his freedom by hanging around? I don’t like it. I don’t like it at all.

Every day I comb through Shakespeare references from social media, reddit, google… and throw out 99% of them because I’ve either seen them a thousand times before, they’re irrelevant (like Shakespeare fishing rods), or they’re just plain dumb (Shakespeare memes are on the rise, and you can thank me later for saving you from most of them).

I do this because sometimes you find a gem, like this 1960 made-for-tv Tempest starring Maurice Evans, Roddy McDowell, Lee Remick and, are you ready for this?  Richard Burton.   I start the movie wondering, “Is he playing Prospero?” Nope, too early, Maurice Evans is Prospero.  Oh, then maybe Richard Burton is Ferdinand.

Love seeing Maurice Evans, too.  For someone my age he’s probably most famous as a Batman villain, and other random supporting bit parts. Nice to see him in the lead.

I should also point out that Bardfilm was there first, back in 2009!

They well deserve to have that know the strong’st and surest way to get.