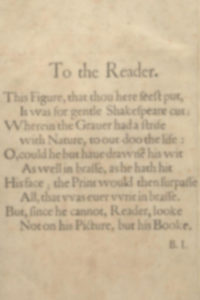 If there’s a pet peeve I have about Shakespeare, it’s that connection between “Shakespeare is hard and useless, therefore why learn it?”  This morning out on a coffee run for the wife I heard a radio commercial for some sort of vocational school that used that exact line, presumably in reference to not wanting to get a real education at a real school:  “What can Shakespeare teach me about IT?”  (IT, for those not familiar, is information technology.  In other words, computer stuff.)

Well.  As a lifelong computer geek (been coding for 28 out of 38 years, thankyouverymuch) with a love a Shakespeare, I think I’d like to comment on that.  Let’s talk about what Shakespeare can teach you about IT.

I’m tempted to do more, but I’ve got some code to write.

One thought on “What Can Shakespeare Teach Me About IT?”