Over in the “He Made Good End” thread we’re discussing the Hamlet/Ophelia relationship and I thought it’d be fun to see if I could take a peek through some of the various interpretations throughout the years. I went hunting for a very specific scene – when Ophelia tries to give back Hamlet’s gifts, and he has to decide on the spot how to react. The big question, in my mind, is to what degree Ophelia deserves the treatment she gets from Hamlet.  Is she just a pawn, moved one way by her father and another by her boyfriend?  Does Hamlet agonize over his decision to crush her, or is he so far removed from that relationship that he doesn’t think twice about it? [Note that most of these clips are in fact the To be or not to be soliloquoy, so you’ll have to wait to near the end for Ophelia’s entrance.] Here we have an old “Great Performances” clip, but I do not know the actors.  At best I can say that it portrays something of a traditional, conservative take on the classic.  Hamlet here clearly looks like someone who is pretending to be something he is not. 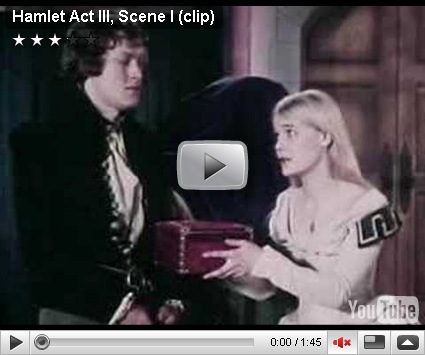 .  As mentioned in the other post, it can take years to get this Ophelia out of your head.  She is…mindless.  It’s sad, really, to see just how patronizing he is toward her.  Perhaps Laertes earlier speech about how Hamlet’s no good for his little sister had some merit?  I think that Hamlet *wants* Ophelia to be a stronger person, but knows full well that she is not.  I’m sure he’s disappointed by this, but really, did he ever have reason to expect anything else? Surely he knows her character, or lack thereof.

version.  Cool.  I’ve never seen this before, and heard that his is one of the best.  Since it is a stage interpretation it’s hard to get the same comparison as modern film versions.

.  People who know Kline only from his comedic roles may not appreciate just how fine a Shakespearean actor he is.  In this scene I particularly note the joy with which he first sees and approaches Ophelia, like “here is the only person who has not turned against me…” and then the sheer denial and physically backing away as he realizes that she, too, is lost to him. 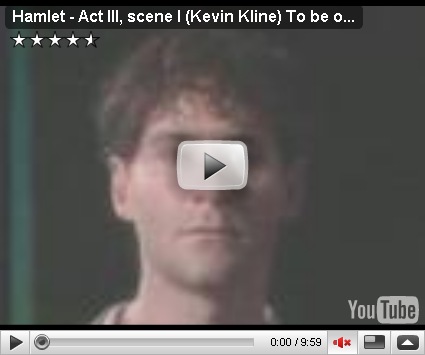 ?  Wow, I tripped over this one just as I was ready to post the rest.  Cool!  His Hamlet, to me, looks like he’s already gone over the edge.  He doesn’t so much as blink at Ophelia, and he’s practically attacking her (verbally) from the minute she says Hello.  He’s nuts.

.  The strongest part of this clip is actually Ophelia, one of the few I’ve seen that is strong enough to storm right up to him and hold her own.  She’s clearly one of those Ophelia’s who is doing her father’s bidding because she has no choice – but she most certainly has feelings on the subject.  Hamlet, for his part, looks a bit paranoid, like he’s afraid she’s going to see right through him. 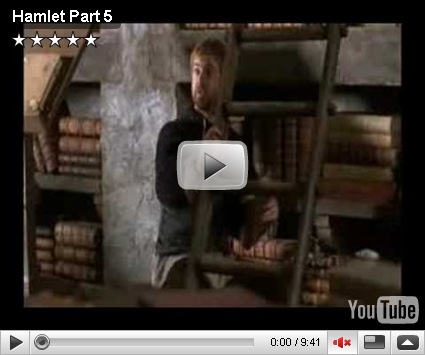 .  I had trouble finding this clip, there’s plenty of him wandering around the video store doing To Be, and later of him breaking up with Ophelia (“no more marriages”) over voice mail, but nothing in the middle.  This clip is actually a collection of Ophelia moments, and Ethan Hawke / Julia Stiles is in there at about 45 seconds.  It’s pretty bad, and I include it only for completeness.  It’s not worthy of comparison to Kline or Brannagh or the others. 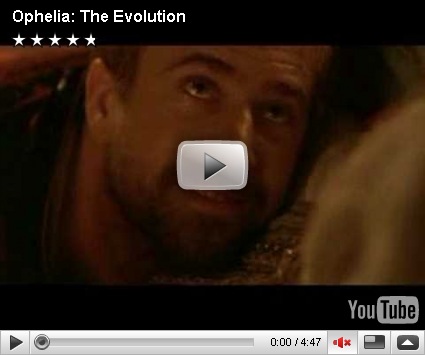 .  I did not necessarily love his version on first viewing, I thought he made some unusual choices particularly near the end.  But when you pick out individual scenes and look only at the acting, and the delivery of the lines, it’s quite genius.  Look at Brannagh’s eyes when Ophelia returns his gifts.  Look at the mix of rage and anguish as he tries to keep it together and not blow his cover.  Wow.

5 thoughts on “Hamlet vs. Ophelia [Video]”