Everybody remembers “Choose Your Own Adventure” books, right?  Always told in the second person, you read a few pages, then it said “If you choose to open the door, turn to page 74. If you choose to jump out the window, turn to page 123.”  I loved these things as a kid. Not only would I read through all the different combinations (and really, there weren’t that many as no matter what you picked you eventually ended back up in the same spot), I’d hack them backwards by opening to random pages and then trying to figure out what decisions I would have had to make in the story to get to that page. 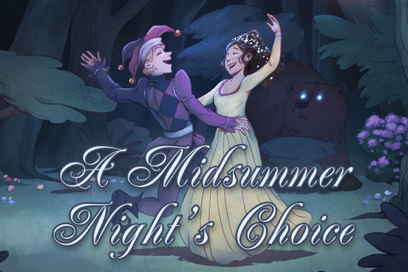 It  was an easy jump for these stories to make it to the digital medium, and Shakespeare’s always a great source.  Back in 2012, Ryan North pulled off an ultra-successful Kickstarter with To Be or Not To Be : That is the Adventure.  Truthfully I think I’ve got that one kicking around someplace, I’m pretty sure I’ve never reviewed it and I probably should.

But! This is not about that. This post is about an entire company dedicated to the medium called Choice of Games, and their latest offering, A Midsummer Night’s Choice (or, Frolic in the Forest). These folks have actually got a content management system designed for creating these kinds of stories, and their library (user generated as well as their own stuff) is gigantic – I lost count at 50+ titles.

What I find cool, as a programmer, is that these “books” are really small interactive apps that can be read as part of the web site, but also treated like apps for your mobile device.  This is a game changer, because now you can bring things like variables and character attributes into it, and make all of the choices that much more complex.  In other words, whether or not the king has you executed for speaking your mind in chapter 7 is going to be directly related to whether the king is 90% angry with you, or only 10%, based on your previous choices in the story.  (That example is totally made up.) In the iPad version (the one that I played), you see all the key status bars while you’re reading the story, and several times I’d make a decision, watch one of them go in the wrong direction, then silently curse that I’d made the wrong move.  What’s also cool is that there doesn’t appear to be a back button, so no cheating – you play the hand you’re dealt.

The story itself, an original concept by professor Kreg Segall, consists of over 190,000 words that tell a mashed-up novelization of a number of Shakespeare stories.  To quote from the site:

When your father, the Duke, tries to force you to marry, you’ll leave civilization behind as you flee in disguise, cross-dressed, into the enchanted forest. Mistaken identities, inexplicable bears, and tiny but fearsome fairies await! (Seriously, they wear little walnut shells for helmets, and ride armored baby bunnies into battle.)

Will you fall into the mysterious Faerie Queene’s clutches? Will you (or your identical doppelganger) find true love? Or will your father’s spies find you first?

I haven’t finished it yet – the thing is *huge* – but I have to admit, I’m enjoying it far more than I thought I would. It doesn’t play like an old fashioned text adventure game that’s light on story and description and really just wants to walk you through the action. It also doesn’t feel like one of those old fashioned ones I read as a kid that comes across like a 50 piece jigsaw puzzle, where you may think that your 10 choices result in 1000 different paths through the story, but really they all converge (typically in an awkward an unbelievable manner) down to a dozen endings.   As I work my way through this one I honestly can’t tell how I’m affecting the story because it just continues to flow smoothly as if my decision was the one the author had in mind all along.

One of the absolute best things, to me, is that for the most part the decisions are not of the “turn left or right” variety, but get at more of the character psychology, instead asking questions like, “You realize that your friend is looking at you like he wants to be more than friends, how do you feel about that?” and then you’ll have choices like, “I’d be open to exploring that relationship,” or “Absolutely not.” If this engine is complex enough to factor in evolving character relationships and still work through the plot in a believable manner, I’ll be quite impressed.

As I mentioned, the various status bars are a neat touch – but I’m not fully sure what to do with all of them.  I have a charisma score of 23%, ok, now what? Is that good or bad? How is that changing the story?  Which of my decisions is changing that?  One UI feature I’d like to see is that when something you do changes a status bar, it should flash to let you know that.  Since I couldn’t figure out how my choices were changing those, I basically started to ignore them.

However, some of them detail your relationship with the other characters, and those are interesting and easy to follow.  The story starts and your father is angry with you.  Depending on your decisions you can make it better or worse.  I made it worse :).

I’m very impressed, a bit surprised that I hadn’t heard of these folks before, and hopeful that they’re doing well for themselves.  Wired magazine isn’t writing up efforts like these that just continue to plug along at their craft, churning out a good quality product on a regular basis.  It’s hard to even describe it well enough to market it. Is it a book, or an app? Is it a game?  Educational? Sure, it’s all of those things.

There’s a few UI things that I’d change.  As noted, I think the status bars should flash or something. I think there should be a back button so I can return to previous parts of the story to see how my decision would change things (although, full disclaimer, I know that I’d use this to reverse engineer how all my options stack up against the changing status bars and then optimize my path :)).  Although the text of the story is put on the right half of a landscape-mode iPad, it still uses vertical scroll, which meant that sometimes (often) I’d have to scroll just a tiny bit to get to the Next button.  That was a little annoying and disrupted the “page flipping” flow.  In fact, knowing that iPad offers a “page flip” layout, I’m wondering if that wouldn’t be better than the vertical scrolling.

How’s the story? It’s compelling enough.  It’s got plenty of Shakespeare elements, and is self-referential enough to have fun with it. It’s only a matter of time before you’re cross dressing and lost in the forest, for example.

What I wasn’t thrilled with was how much it tries to force a love story.  The site claims that you can play as gay, straight or bi — which basically means answering questions about what gender you want to play as, what gender your friends are, and how you feel about them.  I made it pretty clear that I was interested in playing it “straight” :), but found myself having to answer questions repeatedly about whether I wanted to do anything to encourage this other guy’s advances.  If you want to play the game that way I suppose go ahead (note – I did clarify with the publisher that this is not erotica and there are no choices that will get you sex scenes), I just wasn’t interested in that. I was here for the Shakespeare.

I’m going to keep playing through to the end, because I’m genuinely interested to see how much Shakespeare they’ve thrown into the soup, and how the story works out.

You can try the game for free, so take it for a spin and see what you think!

One thought on “Review : A Midsummer Night’s Choice by Choice of Games, LLC”