For years I’ve thought about dressing as Shakespeare for Halloween.  I knew that the key would be letting my beard grow out so that I could shave it into Shakespeare’s iconic shape.  I wouldn’t want to do something attached or painted on.

This year I decided to go for it. I’ve never been especially interested in created a ruff (despite plenty of instructions online for how to do it), but I knew that Chandos had a very simple collar, not much more than you might see on a regular dress shirt.  I started analyzing the portrait.  Basic black shirt? Check.  Big white collar? I must have an old dress shirt that I can wear underneath.  Couple of white strings it looks like, danging down the center, some sort of lacing.  That’s easy as well, even if I just get a shoelace.

I can’t do much about the hair, but I let it grow as long as I could.  It starts to get wild on the sides, but I end up looking more “nutty professor” than immortal bard.  I had enough to work with that I could do the beard.

I expect people to not get my costumes. So I like to bake in hints. I got the idea to print myself up a name badge that included the Chandos portrait, so people would literally have the image in front of them to compare.  I found a template online and filled it out how you’d expect – William Shakespeare, Poet/Playwright, 4/23/1564.  Bonus, I could use the white string around my neck to hold it, like a lanyard.

I also decided I needed the earring.  Nobody thinks of Shakespeare with an earring, but I figure they’d notice it immediately on me, and then they’d double check the portrait to see, and it would be like an anchor to make the whole thing work.

Ready to see the final product? 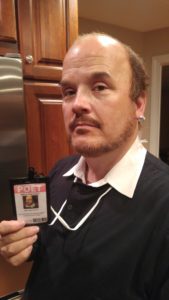 I’m biased, so I can’t tell how close I actually came.  At the last minute my wife suggested I dye my hair brown (rather than grey!) which I think helped a lot, and allowed me to emphasize the moustache more.  I think I could have done better with the collar.

How’d it go at work?  I’m a little surprised more people didn’t get it.  Very glad I did the name badge because once people saw that, it was obvious.  I kept telling people, “This had to be the most telegraphed costume in history, I’ve literally been carrying a picture of it around for the entire two years you’ve known me.”

Extra credit to the one guy who, immediately upon seeing me, said, “Honestly, how often have you dressed like that?”  That dude gets it.

What did you dress up as?  Let’s see some pictures!

One thought on “Happy Halloween! Or, How Could They Not Get This?”

Why then, can one desire too much of a good thing?