So I’m not dressing up for Halloween this year, and thought I’d be lazy and do a “Best Of” Halloween post instead.  But then I searched I realized … did I never post my Othello costume?  I know it was on Facebook, but it looks like I never put up here on the blog!

Fall, 2016. I was hired at my new job in December 2015, so this is my first Halloween.  They do a big company-wide party here, with prizes and everything, and I am definitely going through a phase of life where I’m wearing my Shakespeare devotion on my sleeve.

So I decide to go as Othello.

“Oh no,” you think, “You didn’t put on blackface like Anthony Hopkins, did you?”  Well I still work here, that ought to give you a clue.

Step one, I got one of those white painter’s jumpsuits to make a blank canvas of myself.  Then I started transcribing. 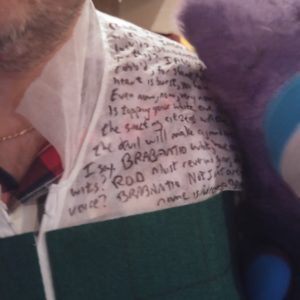 You may not be able to make that out, but it’s the entirety of Othello Act I, Scene i.  I may have had delusions of doing more, but that took me forever (and lots more space than I thought) so I stuck with just making the point.

But then I figured maybe people wouldn’t recognize the play. After all, Othello doesn’t show up in I.i.  So I doubled as the board game (sometimes called “Reversi”): 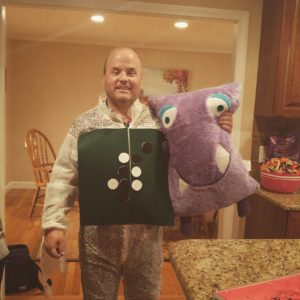 Why am I carrying a stuffed animal? I’ll give you a hint, he’s got green eyes.  He’s a green eyed monster.

Then I figured that there’s still a strong likelihood nobody’s going to get this, so I made it obvious on the back: 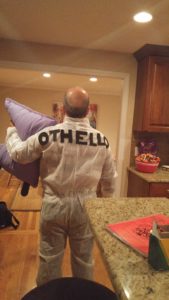 If you can get past the glare, that is. 🙂

How’d it go?  I can’t say most people got it.  Couple of the older people at work were all, “Oh, you’re that game!”  Turns out Milton Bradley let the trademark lapse on Othello back in the 1980s and half these people have no idea what that game is. 🙂

Bonus!  While we were in the mood and since I was rifling through my daughter’s stuffed animals, we were presented with this opportunity: 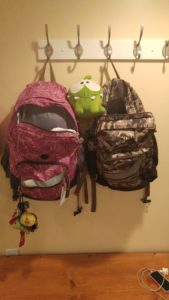 Yes, that’s what you think it is.

I made the beast with two backpacks.

On that note…Happy Halloween everybody!

The very substance of the ambitious is merely the shadow of a dream.