Loyal readers may remember a little over three years ago when we got to help with a very cool request.  A reader from Canada wrote in to let us know that his new purebred Doberman puppy needed a full show name to be part of the Shakespeare theme of his litter.  It seems that these dogs get an “everyday” name, such as Toby, but also a full name from the breeder (in this case, Braebrook), so Toby’s full name was actually “Braebrook’s To Be Or Not To Be.”

After some back and forth and digging through texts, with the opening restriction that her everyday name would be River, we ended up on what turned out to be obvious, yet perfect, “Braebrook’s Sweet Swan of Avon”: 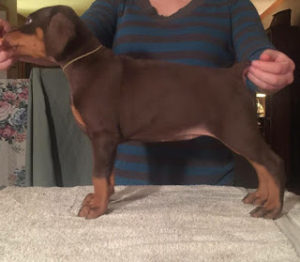 Well I got to thinking the other day (when Twitter analytics told me that “dogs” is the most popular interest of my followers), what’s River look like now?  I reached out to Keir, River’s owner who made the original request, and he was happy to provide us with a new picture. Take a look at River now!  Keir told me that River’s on the left, but I’m relatively certain that’s Keir.  So we’ll assume that River is the one in the middle 🙂

That’s her brother, Rancher, on the other side. Keir’s update:

River has become her papa’s little girl. She and I are nearly inseparable, only breaks away from me long enough to boss her older, and bigger, brother ‘Rancher’ around. Seriously, she’s the boss! At the same time, they too have a relationship bonded by love and devotion.

It only just occurred to me while writing this post that I want to know Rancher’s full name.  If he’s part of the same litter (being her brother, and all), he should have a Shakespeare name as well!  I’ll update the post if/when I find out.

Thanks for the update, Keir!  That’s a very, very good girl you’ve got there. Please feel free to keep in touch and send more pictures!

The gods are just, and of our pleasant vices make instruments to plague us.