I thought for a long time about what we’d do the minute we found ourselves in Stratford-upon-Avon. I had no idea what I was walking into. Would it be everything, or nothing, that I imagined? Would I fall to the earth and kiss the ground? Well, let’s not get too silly. But the point is we were here and we needed a plan.

We scheduled nothing for Monday other than, “Walk around and learn where everything is.” I had my tickets to the Shakespeare Houses, and I had my invitation to come peruse the Collection, but that was all for tomorrow. Today was just for whatever today was going to be.  Getting our bearings about us.

Out the door we went and started walking around. No idea where to go. We knew that we were right up against the Birthplace, but my sense of direction is my Achilles’ heel, and the minute I get to an intersection with more than two options I’m lost.  So it wasn’t long before we were wandering aimlessly, just taking in the scenery.  And then this happened. 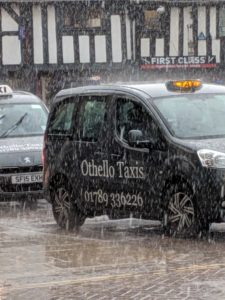 Two things of note about this picture. One, the taxi is an Othello taxi.  I shrieked with joy and had to get a picture.  “It’s an Othello taxi!” I grabbed my nearest child and shook whichever one it was. “Stuff is named after Shakespeare! Oh my god!”  (Little did I know!)

Second – that’s hail, people.  That’s not rain.  That is full on, “Hey, this hurts, maybe we shouldn’t be out in this” hail.  We took cover in some cool archway looking thing.  Luckily it didn’t last long.

We walked around a bit more.  Still haven’t seen any of “the good stuff”. My wife sees a woman consulting a map.  “Excuse me,” she says, tapping the woman on the shoulder. “Where did you get that map?”

“It was given to me!” the woman said, rather defensively, before walking briskly away.  I think she thought we were going to steal it.

Starving, we made our way into the nearest food looking place we could find. No idea how any of this works, how to sit (do we wait or just seat ourselves?), how to order (will it be table service or order at the bar?) and just a million questions.  There’s half a dozen stupid American tourist stories I could tell at this point but I’ll get to the one where I offended the waitress.  I mean, we’ve already been in the country a few hours, it seems like it’s about time.

My wife asks, “Can you tell us where we go to see stuff? You know, the tourist type things?”  I think this is a silly question and I am embarrassed that she asked it. We’re in Shakespeare country, everybody is here for Shakespeare, the universe revolves around Shakespeare at this point.

“Well,” she tells us, “If you go out here and over the hill you can go down to the river, that’s a nice walk. Or if you go to the intersection and turn by the statue that’s the street where they have the Shakespeare things. If you’re into that stuff.”

“Who in the world would be in Stratford-upon-Avon and not be into Shakespeare?” I ask, incredulously.

“Me?” says the waitress.

I suppose it’s at this point where I can answer the question, “Was it what you expected?”  No.  What I had in my head was something more like a rock concert, where everywhere I went I’d see people like me, adorned in Shakespeare merchandise, staring wide-eyed at everything around them, just amazed to be there. What I got was a perfectly normal working town that just happens to be famous for its connection to Shakespeare.  Don’t get me wrong, they do have a very special connection to Shakespeare, and for certain events (like his birthday) they do very special things.  But do they all have the level of excitement that I had? Every day?  I don’t see how they could.  For many it’s a job.  For others it’s just kind of there.

I thought of a great comparison just this morning. I grew up next to Quincy, Massachusetts. Two presidents were born there. I would drive by their houses regularly. Depending on where you were in town relative to the historic areas you could go into gift shops and get merchandise. Did I go? Nah. Was I excited? Nah. Did I care all that much? Nope. It was just sort of there.  Cool that it was there, but that was it. I didn’t introduce myself by saying, “I live near where two presidents lived.” That’s kind of how Stratford ended up being. For me it was a life changing event. For them, it was Monday.

Anyway, back to the tour!  Found the statue! 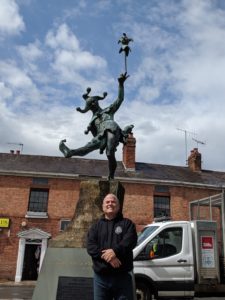 And suddenly I’m looking at Shakespeare’s birthplace. It’s surprisingly plain, and without the coat of arms it looks a little bit like a haunted house attraction you might see at an amusement park. 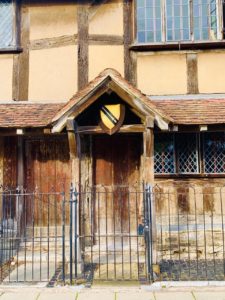 “Is that it?” the kids start asking me. “Is that his house? What is that?”

Honestly I don’t even know. I think so? It must be. But I had no idea what to expect, and now that I’m staring at something, I don’t know what I’m looking at. It’s very non-descript. No one is going in. People are taking pictures in front, and tour guides are explaining, but there’s no obvious “in”.  (Turns out we’re looking at the back of it, but that’s for another story).

I see the entrance to the Shakespeare Birthplace Trust and tell the kids, “That’s where we’re going tomorrow.”  There’s a crowd there, that makes me happy. Someone that works there is hanging out in front so I take the opportunity to say hello. I’ve got this crazy idea that at one point someone is going to say “Oh damn, are you Shakespeare Geek? We’ve been expecting you!” But that does not happen. He’s nice.  I tell him we’ll be coming back tomorrow. He says that’s nice.  I say that we have plans to meet with Chris. This means nothing to him.

Having found where we’ll go tomorrow, we’re now free to explore. My wife wants to go see the river, so we head in that direction. I have downloaded an offline map of Stratford so we have a general idea of where everything is, and I realize that the church is down by the river. It’s at this point that the magnet takes over.

I once described the idea of going to on this trip by saying that it’s felt like a magnet pulling me in this direction for as long as I can remember, and suddenly I’m letting it take me. Reality gets in the way, there are schedules and airplanes and lodging and taxis, but at some point the only thing that stands between you and that force you’ve been feeling is your feet.

So we start walking.  It’s a bit of a walk, and part of my logic in heading right for the church is that it’s the farthest away thing we’ll see, so getting it out of the way first means we don’t have to find the time later.  That’s the practical reason. The more instinctual reason is that this is just what you do. You come to the castle, you pay your respects to the king. You go to someone’s house you meet the host. In the days that have followed and people have said what was your favorite part of the trip? I tell them the grave. Because that’s it, man. That’s the center. He’s there. Everything else that’s built up around him all comes from there.  And that’s where I have to go. 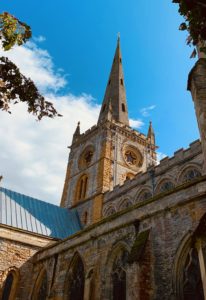 It’s quite a beautiful building. Surrounded by graves, and I want to go exploring, but we are on a mission. 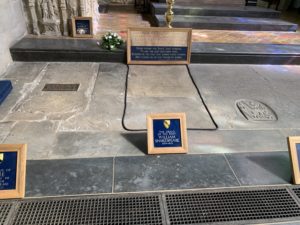 BONUS! Over the next few days I’m going to be surrounded by Shakespeare stuff. It’ll be easy to lose track of where everything is. Where’s his birth certificate?  Right here.

You banished the wrong daughter.