Couple of funny stories to start this one as we wrapped up Monday. Heading back to the airbnb we walk past the Shakespeare Birthplace Trust (SBT) again, and this time there’s no crowd out front. I’m offended. The same man from earlier, the same one who didn’t really care who I was, was still out there.  So I asked, shocked, “Where is everyone??” He shrugged. I wonder at what point he started thinking I’m weird.  I try to engage him in conversation again. I see the “Reception” door next to the normal entrance, and again name drop that tomorrow morning I guess I should go in that door. My family is trying to get me to stop bothering the man, and only later did I realize I sounded like someone out of Rosencrantz and Guildenstern Are Dead. I was sent for! I said in my earlier post that this day was just like any other day for them, but I like to think I was at least a bit more memorable than average. Did you guys see that weird American? Seems to think we should know him. Apparently he’s been bothering Professor Wells.

I’ve also failed to mention thus far that I have no particular shame – I went ahead and pinged Stanley Wells to tell him I was coming.  What did I have to lose?  Told him that if he was in town it would be great to say hello in person (since we follow each other on Twitter and have had conversation).  Unfortunately (for him or for me I’m not sure), he was in Italy on holiday.  But later in the trip where I asked on Twitter where my wife could get a good shepherd’s pie, Stanley chimed in with suggestions. 🙂

Wrapping up Monday we got back to our place and tried to figure out how much energy we had left for dinner. My son had spotted a Subway sandwich shop so we thought ok, cool and easy, grab some sandwiches from a recognizable American joint and just relax for the evening.  We walk back to Henley Street at about, oh, 5:55pm and … everything’s closed.  All up and down the street, the coffee shops, the gift shops, the sandwich shops … closed.

I get back on Twitter and write, “Hey people, in the weeks leading up to this trip when I kept asking if there was anything I should know, don’t you think maybe the fact that everything closes at 6pm was something I should have known!?”  And one of my followers wrote back, “I TOLD YOU!”  Sure enough she was right.  That was back in January, and I’d completely forgotten. She was right, I was wrong.

Tickets in hand we headed right to the center.  The plan was to meet Chris Smith, but not until 11:30, so we would go see the actual birthplace and gardens right at 9.  I think I levitated to the door and handed over my tickets.

First thing we saw was a Folio, which had someone stationed with it to answer people’s questions. I point it out to my son and start answering his questions, and the guide chimes in with her own answers and practiced responses, and I become “that guy” as expected as my son can’t decide whether he’s supposed to listen to her or me 🙂  She’s plainly talking to him, of course.  I’m trying to engage her in conversation about the topic like “Yup, you work here, I’m just a random guest who walked in, but we’re the same.”  She probably couldn’t wait to get rid of me.

I’m realizing only just now, as I write this, that I took almost no pictures this first day! I think I was in shock. There was so much “I have no idea what to look at, there’s so much stuff!” that it never even really occurred to me to single anything out as picture worthy, I think I would have felt like if I can’t take everything I don’t know where to start.

Maybe I was just in a daze, but I don’t really remember everything about that first day. Is that weird? I don’t really feel a connection with baby Shakespeare. The idea of Shakespeare as child? Shakespeare with brothers and sisters? Doesn’t resonate with me.  It’s interesting in a sort of “complete the puzzle” way, but I don’t have much expertise in this stage of Shakespeare’s life. I couldn’t recite his siblings. Or what happened to the house over the years. I feel.

We did take several pictures.  They’ve just got something of a random quality to them. They’re not of anything special because of its significance. They’re just of … well, stuff.  But, if you’ve never been, please enjoy! 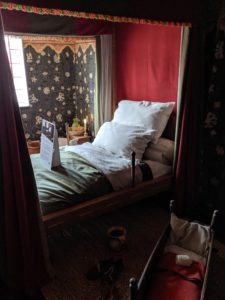 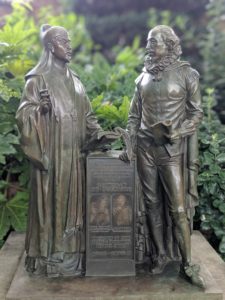 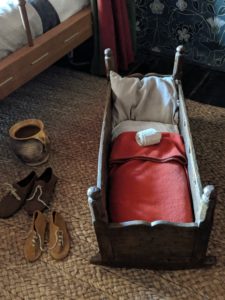 There’s really two parts, there’s the exhibits (where we see a Folio, and various artistic representations of Shakespeare), and then there’s the actual birthplace. Here, people are dressed up in costume and telling us all about Shakespeare’s life and times. I’m afraid to talk to anyone because I don’t want to monopolize. I don’t really have questions, I just want to hang out with these folks. If they said “We’ve got a costume in back, throw it on and come join us” I would have bid my family a fond adieu and told them to pick me up at closing time.

As we near the exit I think, you know, I do want to talk to one of these

people, I’ll feel like I missed my chance if I don’t.  So the last woman we see, I ask about “the chair”. She has no idea what I’m talking about.

Does no one know about the chair?  In 1786, Thomas Jefferson and John Adams went to Stratford-upon-Avon to visit the birthplace, and carved a chip from Shakespeare’s chair as a souvenir.  I always thought that this was a tradition that people did (like touching the Juliet statue inappropriately in Verona) and wondered if I would have my chance.  When friends have gone to Stratford I’ve told them, “Get a chip off the chair.”  Guess I’ve misunderstood that story?  If these folks don’t know what I’m talking about, chances are I’m wrong.  The woman I’m speaking with does tell me that “Shakespeare’s chair” is at Anne Hathaway’s cottage, though, so we shall see on another day!

We go sit outside, where there’s to be Shakespeare performance.  I wonder what they’ll do, and if they’ll take suggestions from the audience, and think that something from As You Like It would be nice on a day like this. While we wait, I google for the Jefferson chair story, and decide to go back in to show it to my new friend. While I’m waiting, I hear “All the world’s a stage….” begin from outside and think, “Look at that, I was right.”  I never get a chance to show the link to my friend because she’s talking to a regular tourist about regular things, and I decide not to interrupt (or wait forever).  I go back outside.

Before you know it, it’s time to meet Chris.  I have no idea what we’ll do or what we’ll see, I’m just happy to be able to go in the special door and say, “We’re expected.”  We get cool visitor passes.  My family of five hangs out waiting in the lobby as Chris (who I’ve not yet met) enters and tells me, “You don’t look like your profile picture.”  🙂  True enough, but how many other people you got bringing their children into the collection?

We go inside and meet Chris’ colleague Madeleine Cox, and finally I get to have the “We’re here and we do this because we love this stuff and we think life’s a better place because it’s got Shakespeare in it” conversation I’ve wanted to have. Hurray!  Madeleine tells us that she was trying to decide what would be sufficiently cool to show us. Then she comes over with something and tells us, “We just got this from Sotheby’s last week. It’s so new it’s literally not even catalogued yet.” 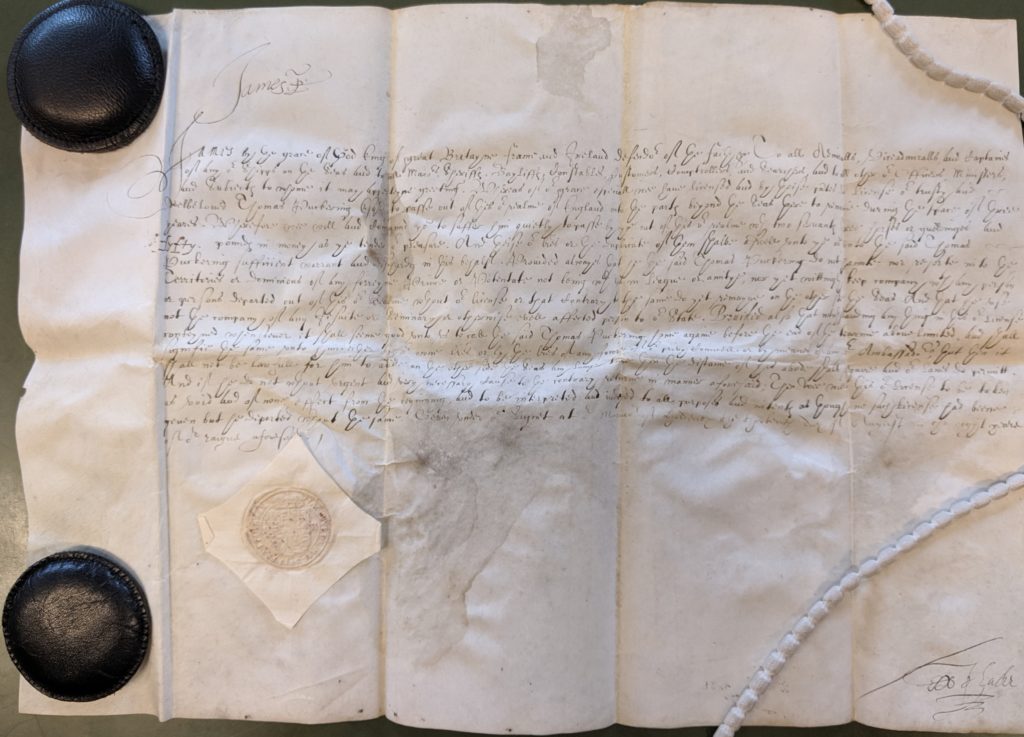 That is a passport issued by James I (complete with seal!) to young Thomas Puckering, who was known to John Hall (Shakespeare’s son-in-law), thus making the Shakespeare connection.  Looking for additional links to learn more about the document I found this interesting one on a site called Passport Collector, apparently the personal site for expert Tom Topol, where he was called in to the SBT for, “Assistance of identifying a 1610 issued document as safe-conduct for Sir Thomas Puckering. One of the earliest British passports in existence.”  Nice!  I think that Chris and possibly Madeleine might eventually read this, so if either wants to fill in some of the detail please feel free! Yes, I know you gave me the notes, I can’t find them. 🙁

Ok I’m going to wrap it up here, even though we did grab a bus to go see more of the Shakespeare Houses. Despite this being quite possibly the longest post I’ve ever made, it only takes us up to about lunch time on my first full day in the center of the universe.  I haven’t even gotten started.

A special public thanks to the Shakespeare Birthplace Trust for the hospitality, especially Alisan Cole (who got me started, including hooking me up with the taxi driver to get us back to London), Chris Smith (who now knows what I look like behind my profile picture) and Madeleine Cox who satisfied my need to “geek out” in Shakespeare land!

Macbeth, King of Scotland, makes a series of ill-advised career moves and is eventually demoted to Thane of Glamis.