We finished up Tuesday night by finding exactly where New Place and Hall’s Croft were, because those would be our next stops.  I kept forgetting about the school, because it’s not one of the ticketed “five houses of Shakespeare,” so I have to keep reminding myself not to miss it – usually right as we pass it and say “Oh yeah, the school, we need to do that.” 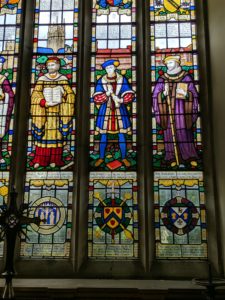 While we’re in the neighborhood, though, we do pop in to the Guild Chapel, which I wouldn’t otherwise have known about had social media not told me is a must see. And what did I find?  Oh, just a stained glass window of Shakespeare’s father.  Wasn’t expecting that! That’s him on the right. Note the coat of arms.

I ended Tuesday night with an email to my mysterious pal Jonathan, still without any real plan, who basically said, “Call me tomorrow morning.”  My phone hasn’t been out of airplane mode for days because I have no idea how to deal with the whole international roaming thing, and we still have literally no plan about what’s going to happen, but we’ll figure that out tomorrow. I’m caught between wanting to go see cool Shakespeare stuff, and the crazy sounding argument I’m making to my wife that, now that we’re in a foreign country, we should pile the whole family into a car with a stranger and let him drive us to an unknown destination.  Like I said, I’ll deal with that tomorrow!

On to New Place!  Which we’re way too early for, it’s not open yet. While we’re waiting I get to do a little research and learn some of those “I probably should have known this” facts – this is going to be a “Here’s where New Place used to be” exhibit, and not the actual New Place. Makes sense, I suppose. But I have to explain this to the fam.  Sometimes we’re looking at the actual Shakespeare-age stuff (like at Anne Hathaway’s cottage), but here it’ll be more like going in to a museum where we see stuff *about* that stuff.

I’ve got a mission, though – I’m looking for the ring.  Before I ever left for the trip, and knowing that I would get a chance to snoop around the Shakespeare Birthplace Trust Collection, I asked Bardfilm what I should ask for.  “Ask if you can try on the ring,” he told me.  This is the man who told me, when I first went to the Folger Library in Washington D.C., to ask if I could see Folio #1.  I did, and I did. 🙂  So I did ask about the ring, but Chris told me that the ring is, in fact, on display at New Place.  And here I was!

The garden at New Place is adorned with some beautiful statues that I’d love to show here, but I’ve got so many pictures of so many statues that I’m planning a separate post with just those.  But here’s a taste: 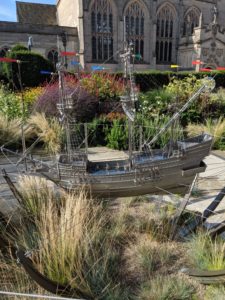 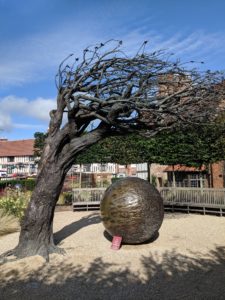 They actually did offer a tour, and I would have loved to hear more about the significance of these pieces, but we were on a fairly tight timeline.

Navigating New Place is a bit like one of those first-person adventure games, for Shakespeare Geeks. You’re in a twisty maze of passages, all alike. You turn a corner and then bam! Treasure!

I walk into a room and come face to face with a Cobbe Portrait.  “Well sure,” I say, “Makes sense, this is Stanley Wells country, of course they have a Cobbe…” and then I realize, “Holy cow that’s *the* Cobbe Portrait!” I’m not sure I really understand how art works, because apparently I think that one museum gets to have an original and anybody else who might also want to show that just has some sort of copy? Like in the gift shop?  I’m not always smart. 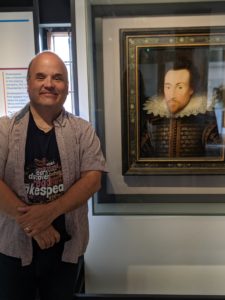 And for those that missed it when I Tweeted this picture, Bardfilm asked me whether that was maize adorning the edges of the frame.  I confirmed that it appeared to be, yes.  “Interesting,” said Bardfilm.  “Corn on the Cobbe.”  This is why I hang out with him, because I constantly have to repay him for puns like that.

I also spotted this cartoon on the wall, which makes me realize that SBT is a bit in on the whole “That looks nothing like Shakespeare” joke. 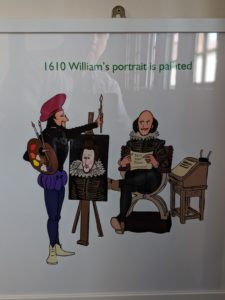 (If you can’t read it, Shakespeare’s holding up a sign that says “More hair please, and prettier.”)

And speaking of treasure … my precious! 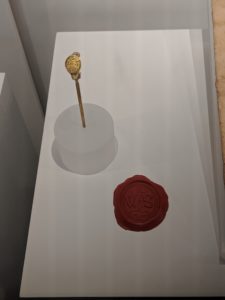 For some reason that even surprised me, this turned out to be the item that I really just stopped and stared at, transfixed, almost as long as I stood at the grave on our first day. Something about the direct connection.  If you don’t know the story, this “signet ring” was found in 1810 near Holy Trinity Church. Although true provenance is impossible, it’s indeed quite possible that this was William Shakespeare’s personal ring that he perhaps lost outside the church. Intriguingly, we do know that Shakespeare altered his will, crossing out “seal” and writing “signature” – had he lost his ring?  In a way it’s very much like other “could have been, but we’ll never know” objects, like the second best bed we saw earlier. True, but there’s something about that W.S. that just makes it feel more real. 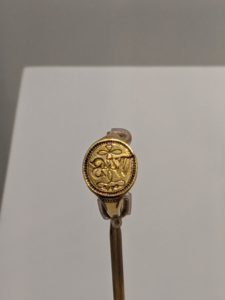 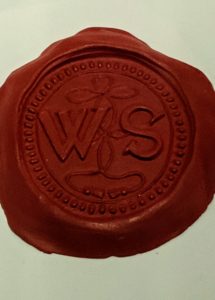 Time is getting away from us!  As we’re heading outside I remember that my phone is still in airplane mode and I’m supposed to be calling Jonathan with an update.  I figure out how to turn it on, and see several missed calls.  I get in touch and it turns out he’s here in town, but doesn’t want to intrude on our family plans, so to call him when we’re done.  I tell him that we’ve just got the school to see and we’re good!

My mistake.  I thought, all this time, that the school was more like a church – walk in, no ticket, take some pictures of a historic building and say “Yup, this is where Shakespeare went to school” and we’re done.  Wrong.  In a hurry now I stand in whatever line had formed, pay for my ticket, then suddenly we’re waiting. But we waited at Anne Hathaway’s, too, and that was more just an introduction and “You’re on your own” so this could have been that.  Nope!  We’re whisked into a room to watch a movie.  Egads.  Interesting, sure, but not what we thought we would be doing. Before you know it, though, we do get to go upstairs where we find ourselves in Latin lessons?  I do get a kick out of this, having taken Latin as my foreign language back in the day, so when the teacher says “Salvete pueri!” (hello, boys) from instinct I respond, “Salve magister!” (hello, teacher!)

Apparently there are two classrooms, and the children will eventually be taken to the other side where they’ll get to write with quill pens.  Sounds amusing but, again, not really why we came.  I sneak over to take a picture. 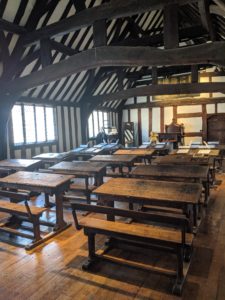 Just then my phone rings. It’s Jonathan wondering where we are, and saying that he’ll meet us at the school.  I make the necessary sign to my family and we sneak out.

I ask the woman who originally sold us our tickets whether, if we had time, we might be able to come back and let the kids do the quill pen thing.  She says sure, and tells me that she thinks somebody is here to see me.  I turn around and finally, after something like eight months in the works, I’ve met my first international Shakespeare friend.

Heading outside for proper introductions and to get out of the way of the crowd, I introduce my wife and geeklets.  Although I’ve run this blog literally since before one of them was born, it’s easy to still envision them as elementary school size when in fact my two oldest are as tall as me, and my boy is coming up fast.  Jon asks what we want to do, and I ask if the marriage bond offer is still on the table.  I’ve talked about it with the family, and while my wife is still mind boggled at this craziness, the kids are on board the “We’re here for you, Daddy, so if this is what you want to go see, let’s do this!” bandwagon.  The problem remains that his car is quite small.  I insist that we’re willing to squish, at least to give it a try. If it can’t happen it can’t happen, but we have to try.  I’m also half thinking that if it doesn’t work I’m not quite sure what the backup plan is, as we’ve seen all the touristy stuff and I’m sure Jonathan has as well. So short of “Let’s go get some lunch” I don’t know how we might justify the time for him to have come all the way out here.

We start the trek to where he parked (it’s not always easy to find parking here!) and he steers us past a random Puck statue that I didn’t realize existed! 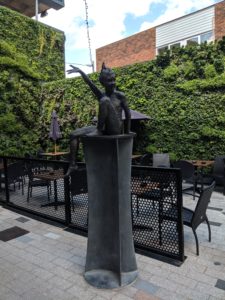 I love that this town is just randomly sprinkled with Shakespeare stuff.  I could spend days here just finding it all.

Eventually we arrive at his indeed quite small car.  He pops open the hatchback, moving around some blankets, and says, “Who wants the trunk?”  I’m not sure if he was kidding.  My son thought he was kidding, and went along with the joke, climbing in the trunk.  I mean, it’s not like it’s sealed, it’s more like a squishy back seat – it’s open to where we will be sitting.  My girls think this is hysterical.  I’m trying to make eye contact with my wife to see if she’s going to veto this any time soon.  But no veto comes, my son realizes that we’re not joking and that he’s about to have a story to tell his friends, and we close the lid on him.

The rest of us do indeed fit in the car with some lap sitting, and me still, three days later, forgetting what side I”m supposed to get in on.  But we’re off!

What happens next?  Does he kill us and bury our bodies somewhere? Stay tuned for the stunning conclusion!

One thought on “Shakespeare Geek in Stratford : A Mysterious Stranger”