With the birthplace and our super secret special visit to the collection out of the way, we jumped on a bus and headed out to Mary Arden’s Farm and Anne Hathaway’s Cottage.

First stop Anne’s house! It was difficult to get the whole thing in a single shot, so I’ve included an artistic representation (which was hanging on the wall as we went in), for context. 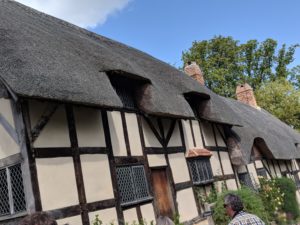 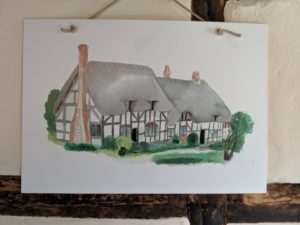 It’s here that the first person spotted my shirt! I was wearing my “Shakespeare makes life better” shirt, that I made specially for this trip (it’s one of my few long sleeve designs). As the group of us entered the first room, greeted, by a tour guide, he was acknowledging people and making small talk. Reading my shirt he said, “Well yes, yes he does. I can safely say I agree with that.”

Before he dismissed the group to start the tour (self-guided) he said to me again, “I do like that shirt. I’ll remember that.”  So I reached into my pocket and handed him one of the Shakespeare Geek stickers I told you all I’d be carrying :).  I told him that I ran a web site dedicated to Shakespeare, and that this was sort of “my brand”.  He seemed happy. 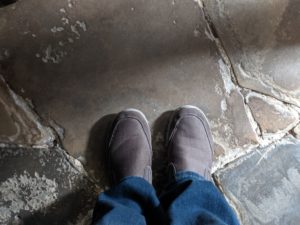 And here’s my most boring and yet coolest picture.  When we went down into the kitchen, the guide was telling us that of all the things that have been restored here over the years, the floor that we’re standing on is in fact original. “So,” he said, “Of all the places that you walk, it’s safe to say that right now you are standing where William Shakespeare stood.”  So I took the above picture.  I notice that several people grabbed their cameras and did the same thing, stealing my idea 🙂 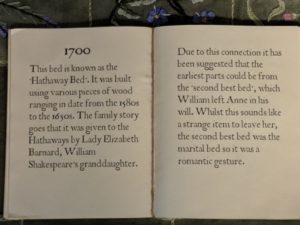 I started our trip to the birthplace taking pictures of all the beds. Is that the second best bed? Is that it?  Turns out I could have waited, because this one says right on it, “This is the one that might have been.”  Like so many Shakespeare things the best we can do is make guesses based on evidence. 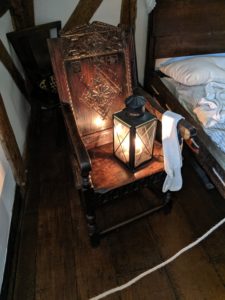 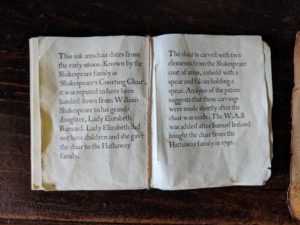 And on that subject, is this the chair? In our last stop I asked about the chair that Thomas Jefferson claims to have taken a chip from. Though no one knew the story, I was pointed to “Shakespeare’s Chair” at Anne Hathaway’s house.  It didn’t really look the worse for wear, though.  I guess we’ll never know!

On to Mary Arden’s, which is in fact a working farm.  This is as close to a Sturbridge Village or Plymouth Plantation that we’d would get. Do those references mean anything outside of New England? Imagine a place that’s pretending to be the age it depicts. So all the workers dress and speak like they would have centuries ago, tending to their chores, giving lessons and so forth.  That’s Mary Arden’s farm. 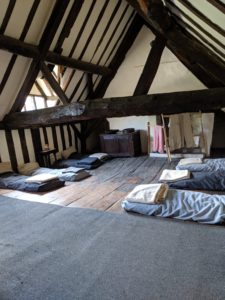 I didn’t take many pictures here, it was in all honesty looking much like Anne Hathaway’s cottage just without the specific “Shakespeare went here” vibe.  I did get a kick out of this shot, though, because all I could think was “Looks like they were running their own Airbnb.”

What the farm did have was animals.  Lots and lots of them.

There were also pigs to feed, both babies and mama.  We bought food and fed everything that we were able to feed, which led to a dad joke opportunity:

“A duck just bit me,” said my oldest.

“Maybe he thought you had food. Or, were food,” I replied.

“Well no, of course he wasn’t. You just said he was a duck.”

So overall it was a very nice visit to a farm, I just didn’t come away with a whole lot of Shakespeare content.  Still a nice way to spend an afternoon. Huge place. Had some lunch there. Could have spent much longer.

As Tuesday winds to a close, it’s time to tell you about Jon.

Way back in I think it was January, I posted about my upcoming trip and asked for suggestions.  I got many (including the advice that all the shops close at 6pm!) and almost missed a late one at the end from Jon Fraser, who has been a periodic contributor to the site over the years (I see his name in comments dating back to 2016) who offered a number of ideas, and then dropped this bombshell – turns out Mr. Fraser works for the local government in Worcestershire, where they just happen to have Shakespeare’s original marriage bond in their archives and would I like to see it?

A conundrum!  On the one hand, well duh, of course I want to see it. But it’s more complicated than that, as Worcestershire’s a good 45 minutes outside where we’ll be, and I’ll have my family with me and they might not be quite so excited about spending an afternoon (assuming we can even get out there) to see a piece of paper that doesn’t really mean all that much to them.  So we go back and forth a bit over the weeks and honestly the idea just kind of stalls.  But before we leave I do open up the thread and tell him I’ll be there next week.

What’s waiting for me Tuesday night? Email from Jon saying that he’s seen my posts on social media, and now that I’m local do I want to get together? Sure!  It’s still unclear whether we’ll hike it out to Worcestershire or just hang out, but that’s to be decided tomorrow.

Ok, that about wraps it up for Tuesday!  We still have New Place and Hall’s Croft to see, as well as the school.  And whatever mystery Mr. Jon Fraser introduces to the story…

Stupid Hermia ran away with stupid Lysander even though her dad told me I could have her.