I know my kids trust me.  I know this because, when we first began planning a once in a lifetime trip to Shakespeare’s birthplace, I told them, “Hey listen. We’re all going to pile uncomfortably into a tiny car with a stranger who is going to drive us an hour out of town to see some cool stuff.”

“What kind of cool stuff?” they’d inquire.  “How cool? It must be very cool indeed.”

Fast forward to Wednesday and we are indeed cruising along in Jonathan’s car, my son in the trunk (trying to decide whether to make “Help me!” faces to the other cars, I learned later), heading off to see the magical piece of paper known as Shakespeare’s wedding bond.  Along the way we find plenty of stuff to chat about – he’s just been to Denmark and visited Kronborg Castle (aka the setting for Hamlet). We talk about American sports, we touch briefly on politics. I’m trying to keep the conversation less about Shakespeare and more social, so my wife and kids aren’t completely left out.

And suddenly we’re there!  We’re a bit early to meet our contact, so we stop for a coffee and see if we can’t get in to the actual church 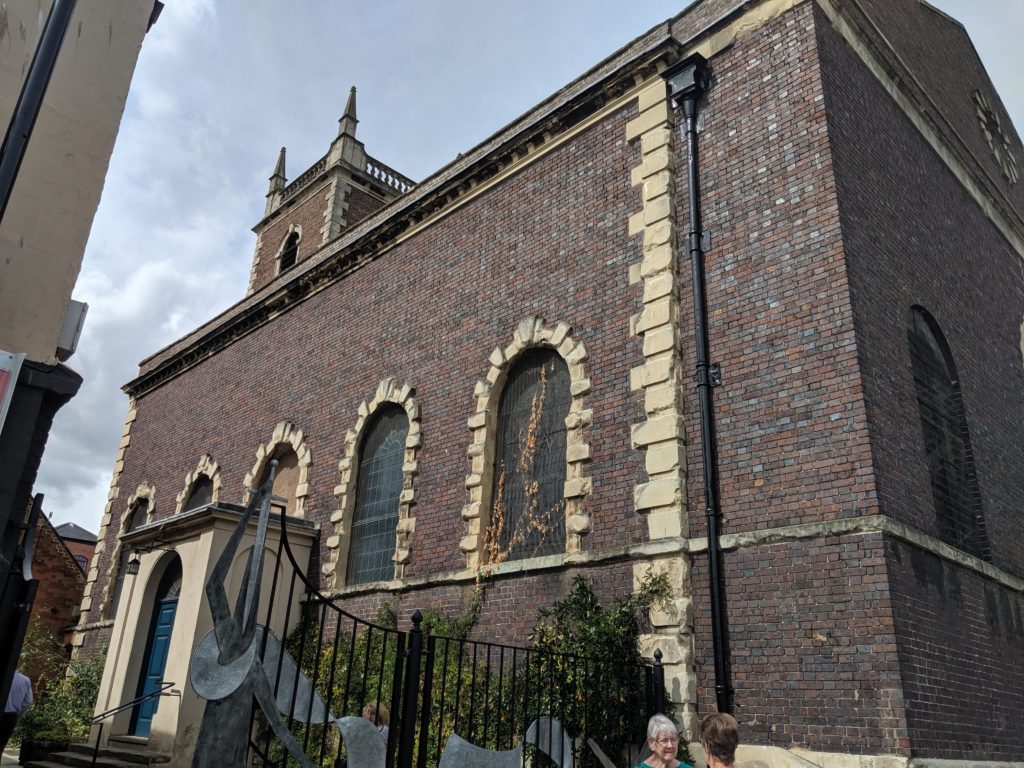 But alas we cannot.  However I soon discover that the cool stuff is outside, because look who is there to greet us! 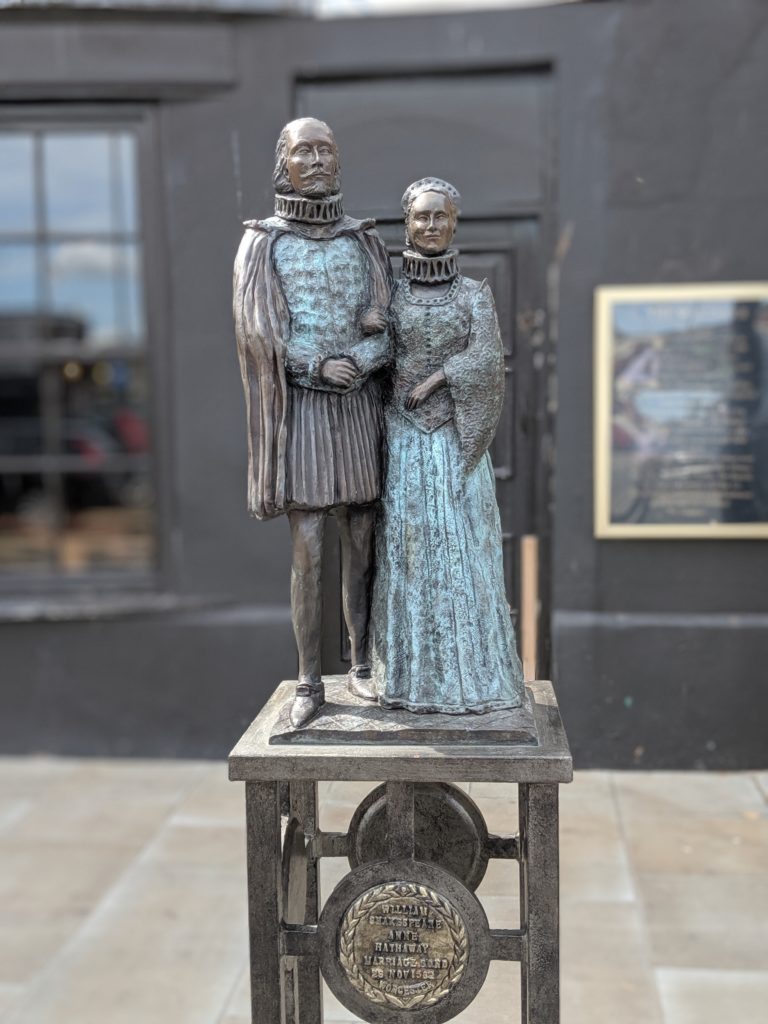 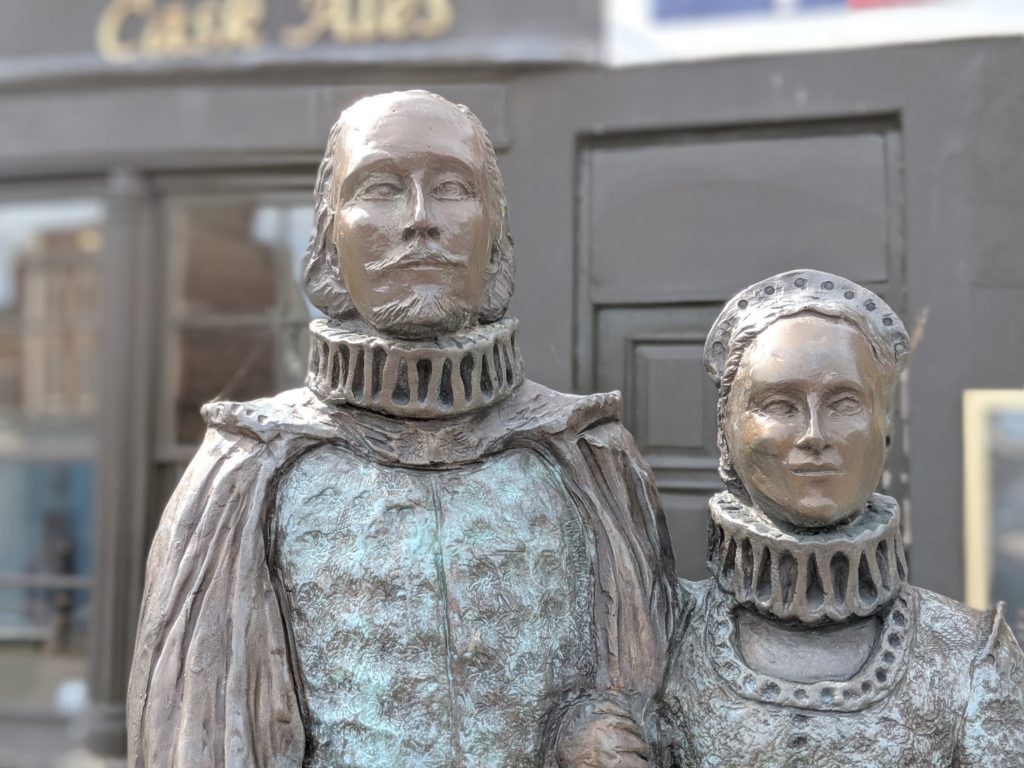 How many likenesses of Anne Hathaway do you know of, like, at all?  I know of that one poorly drawn sketch that, as far as I can tell, has only ever been used to say “She wasn’t really an attractive woman.”  So how pleased was I to find a depiction of Will and Anne together?  They even look happy.  Later when I arrived home and showed a coworker this picture he asked when the statue was made, and honestly at the time it never even occurred to me to wonder.  I’m sure it’s not original, it wouldn’t be out in the middle of the street if it had any historical significance. I just like that it exists. So few people think to ever put Shakespeare together with his wife.

Finally it is time and we head into the library and down into the archives (I love getting to go through secure doors and down passageways that only light up when we walk into them!) where we meet Jonathan’s friend Gillian Roberts, Keeper of Shakespearean Treasures… 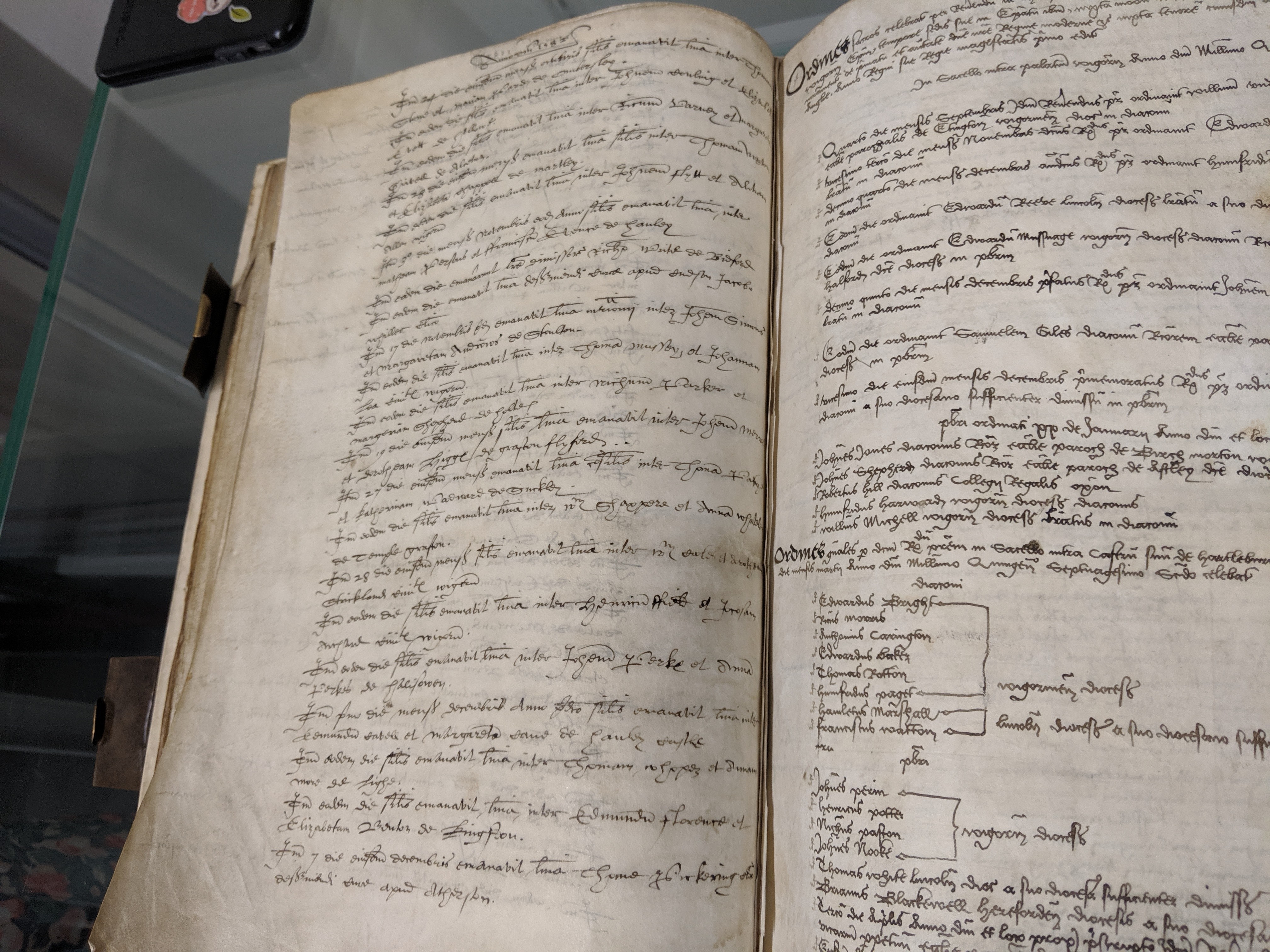 And just like that, there’s that magical mystical piece of paper I’ve been telling my kids about.  I mean, sure, it’s a whole book of pieces of paper that are no doubt very exciting to the folks researching this area of history. But I’m reminded of the time I wrote a technical magazine article and then took a copy to show my mother.  She stared at it for awhile until, amused, I said, “Can you understand a word of it?”  She said, “I only need to see two words, your name. I’m just looking at that.”

I know the feeling.  Like I always say, I’m here for the Shakespeare.  Here, let me blow it up for you. Halfway down the left page, toward the center:

I am no doubt using the terminology incorrectly in explaining what we’re looking at, so here’s a link to Shakespeare Documented that explains it better What we see here is the entry in the Bishop’s register that famously misspells Anne Hathaway’s name as “Whateley.”  Although there is a Whateley earlier in the register and it’s easy to think that the Bishop just got confused, it also says she’s from Temple Grafton, and nobody knows where that came from.

This is the picture that I’ve been showing people, because it was right there out in the open for us to get up close to (I have pictures with my kids all around it, too).  Also because you can read it.  However, it’s not the only document in the room, or even the most important one.  The actual marriage bond is sitting right next to it, framed and under glass… 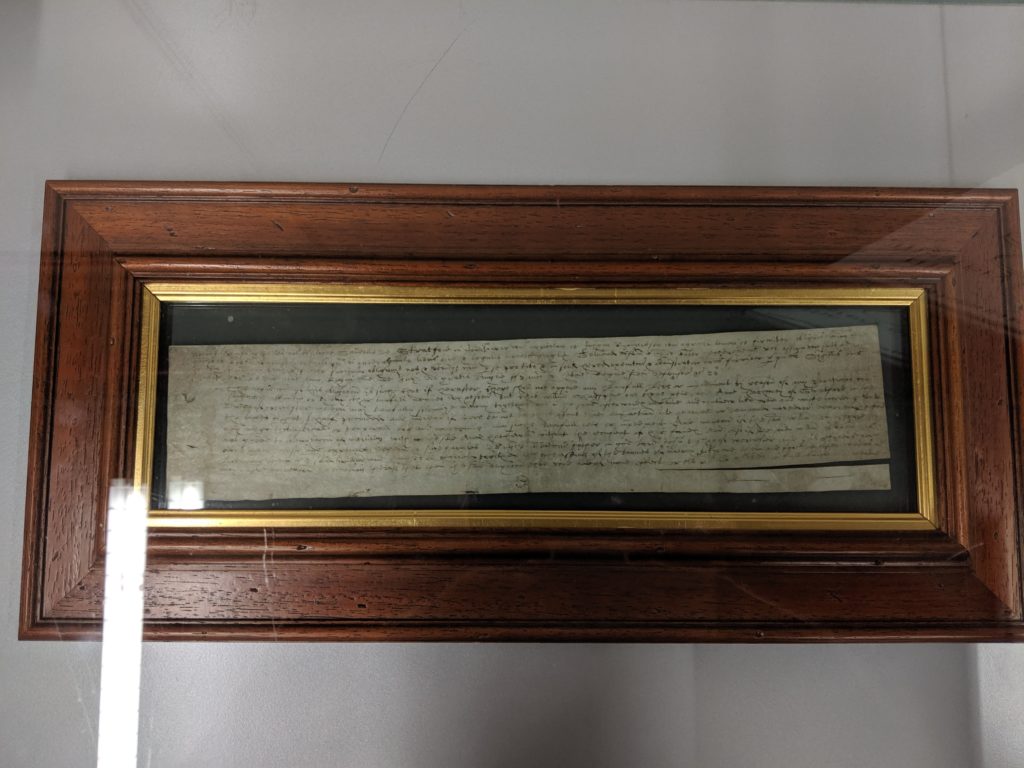 The bond (again, see Shakespeare Documented) was the document that there were no reasons why William and Anne should not be married, and, if it turned out later that there were, then the Bishop would not be held responsible or accountable. Unfortunately, it is very hard to read, at least to my layman’s eyes, so without a magnifying glass and my face an inch from the paper I can’t really “feel” this one like the register, you know what I mean?

What of the actual license?  It is lost to history, I’m afraid.  They have on display this book: 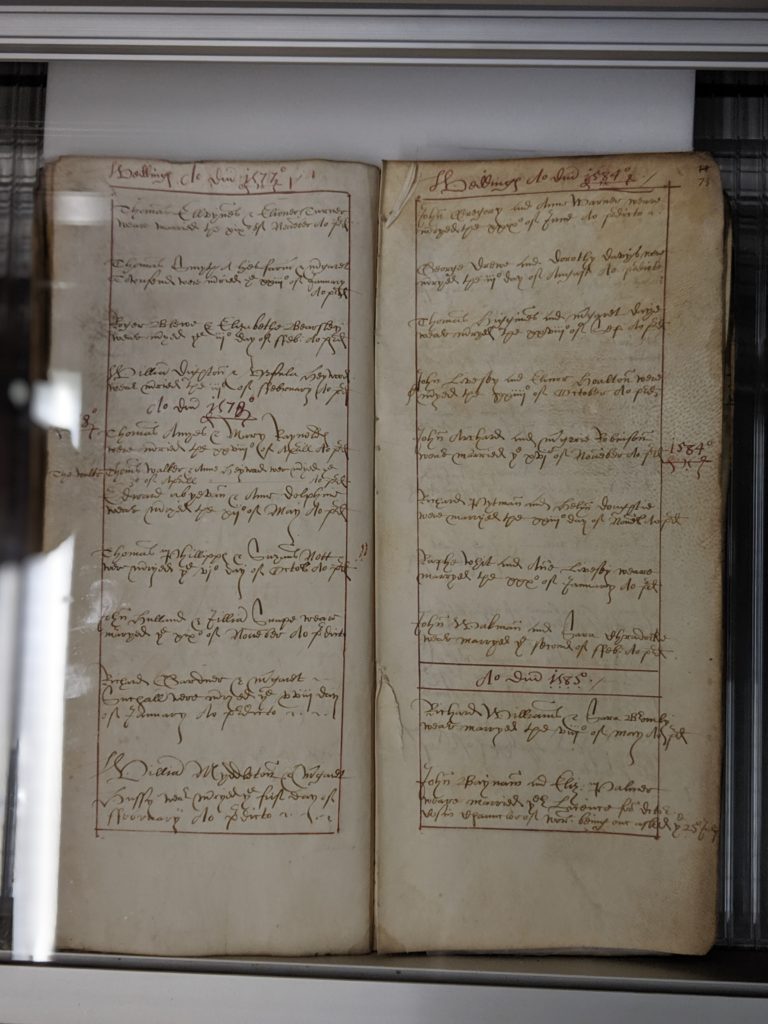 Which, if I understood correctly, is where the license *would* have been – but if you can read the header, you’ll see the dates jump from 1577 to 1584. Shakespeare was married in 1582.

When trying to explain the significance of this to my family the best example I could use was, “Imagine we had a chance to go see the Declaration of Independence. Not passing by it in a line like a thousand people do all day to take a picture of it at a distance under glass as we stream past, but to actually be invited into the room, by ourselves, and to be so close and take your pictures so close you could touch it.  The book on the table behind you is two hundred years older than that. So yeah, when you get back to school and your friends are telling you all about their trip to Aruba, you know that thousands and thousands of people get to go to Aruba, but do you know how many people get to do the kind of stuff you’re getting to do?  Pretty much nobody.”

Our hosts, perhaps wondering if this was indeed an exciting treasure to show three teenagers, began rifling through other chests looking for even more cool things to show while we were here.  Who wants a walk through the history plays? Check out the letters and royal seals of Henry V, Henry VIII, Edward VI and James I! 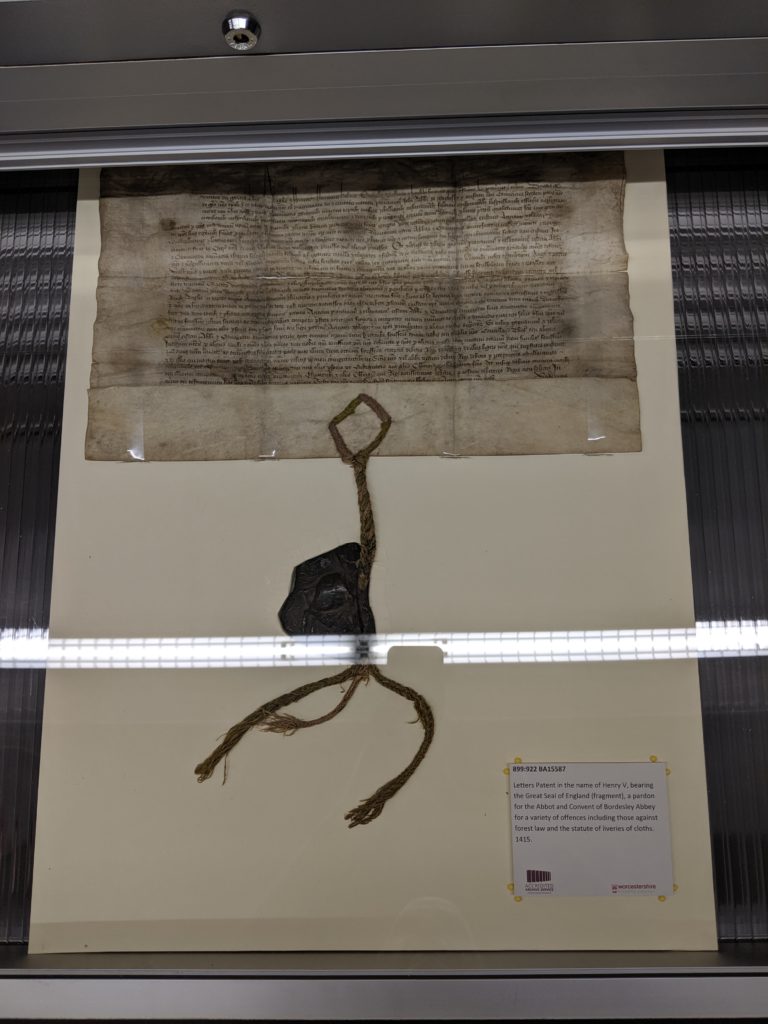 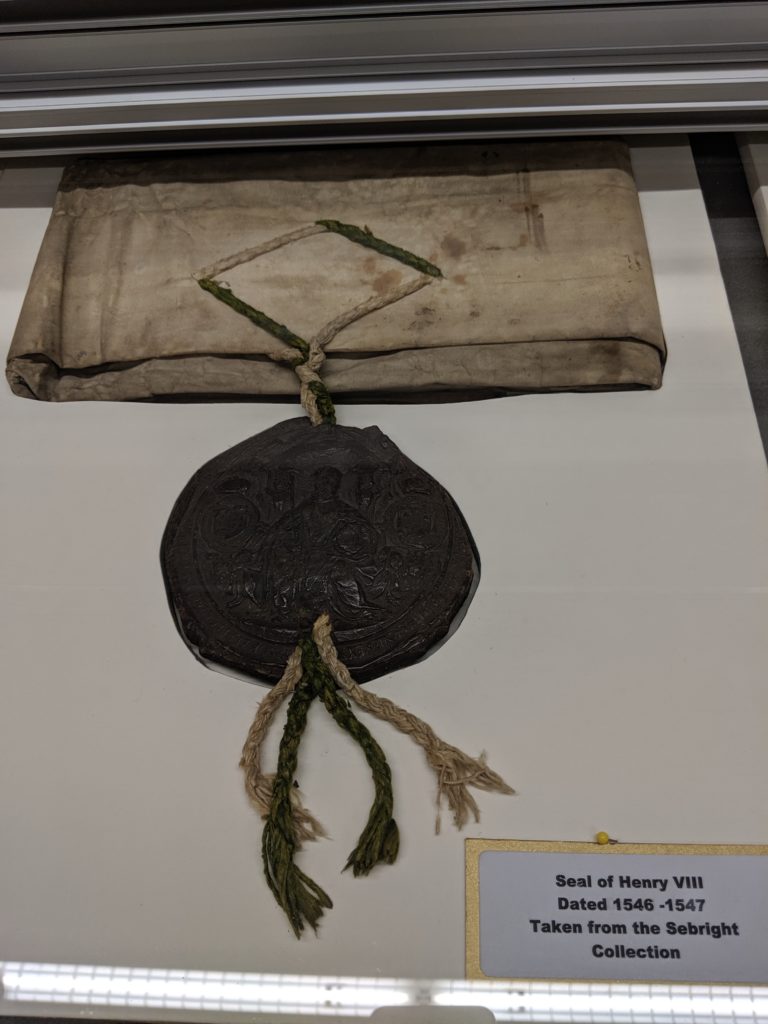 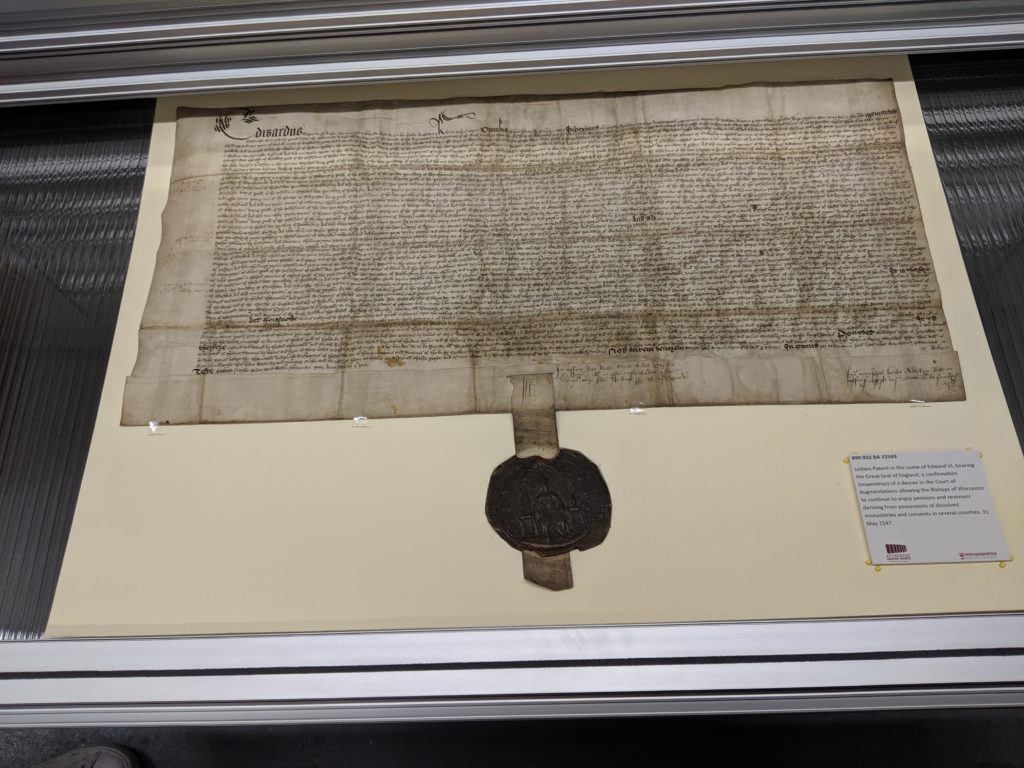 It was odd seeing Henry V’s name out of context (so to speak). I want to go put it in italics just out of habit. You always hear stories about James I, or Henry VIII.  But Henry V I really only know from Shakespeare, so there’s that parallel universe thing your brain does where it says “Oh, whoa, he was a real guy.”  As if a fictional character just stood there in front of you.

On the way out I handed Shakespeare Geek stickers to my new friends Jonathan and Gillian.  I know Jonathan reads the blog, but I have promised to followup with Gillian when these posts go up.  Hi, Gillian! Thanks for the visit and the special access, it was amazing!

We wrap up the afternoon with a walking tour of some of the more historic buildings in Worcestershire and say farewell to Jonathan, with a promise that if he finds himself in America any time soon we will do our best to return the favor. He then presents me with a parting gift!  Which makes me feel a little silly for handing out stickers :), but what can I do about it now?  But the story of his gift is a story for another post.

It was a pleasure meeting you Jonathan! I hope our paths cross again in the future! Thanks infinitely much for making this happen (and for the gift!), especially with my family in tow. I joke about the awkwardness of lugging my teenagers around to see these things they don’t understand (when they’d rather be in Aruba), but I can tell you the price of a trip like that just by searching Expedia.  A trip like this?  Priceless.

One thought on “Shakespeare Geek in Stratford : The Wedding Bond”

The wheel is come full circle.