From the minute I walked down Henley Street and saw Shakespeare t-shirts in the window I knew that the entire trip would be a living Venn Diagram between “I already have that” and “I must have that.”  I was not mistaken. Every trip to every gift shop was basically, “Yes, yes, one each please of all the things!”  But I knew I had to be selective. How many miniature copies of the sonnets do I really need? 🙂

I could pepper my timeline posts with “…and then I bought this!” But that would just make those posts longer.  So instead I decided to just do a gallery right here of all the stuff I ended up coming back with. Enjoy! 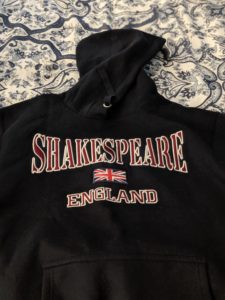 The first store we went into was actually your classic “tourist stuff” gift shop, part general England stuff, part Harry Potter, part Shakespeare.  T-shirts, hoodies, coffee mugs.  It’s here that I spotted my first “not by Shakespeare” t-shirt (I think it was “Earth has music for those who listen?”) and called it out to my kids, not necessarily loud enough to shame the clerk but hopefully enough to let anyone who was thinking about it know the mistake they were about to make.  Here we picked up a hooded sweatshirt, at my wife’s suggestion, because honestly I do need a new one.  A practical purchase.

This store does have a number of “dust collector” type things that would be perfect for my desk at work.  Little busts of Shakespeare sort of thing.  I keep coming back to one (literally, I return to the store twice to look at it) but decide I just don’t like this one, his features are too pointy. I decide to keep looking. 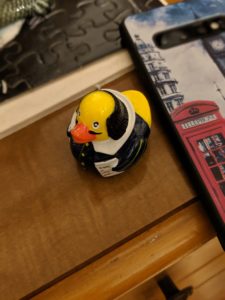 I have wanted to add a Shakespeare rubber duck to my collection for years. So when we spotted these at the Shakespeare Birthplace Trust I knew I wanted one. The problem is that this one is small (phone for scale). It’s the kind of thing you could balance on your thumb.  I debate whether to get it.  It’s still early in our trip (and that’s how I tend to buy things, telling myself to hold off until the last moment).  But my son decides that this is something I want, and wants to use some of his trip money to buy it for me.  They actually want 4.50 for it, which seems a little outrageous, but we learn later that’s because it’s actually got lip balm in it 🙂 My daughter gets one for herself as well because she prefers the tiny ones. 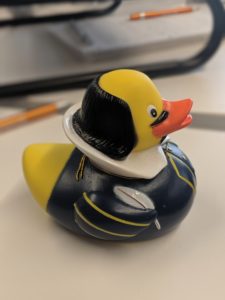 And wouldn’t you know it, the next day we find the “real” size ones (imagine the kind of thing you can hold in the palm of your hand).  What’s more annoying is that they only want about 5 for this, where the smaller one was 4.50 (that’s when we realized for the first time that the smaller one served a dual purpose).  My son’s all bummed out now because clearly this is the one I really would have wanted, and he does not have enough trip money to buy both.  So we compromise and decide that *I* bought *him* the smaller one with my own money, and thus we can also get the big one, which can be from him.  In fact, the little one is now sitting on his desk next to his phone.  The big one is on my desk at work.  Problem solved. 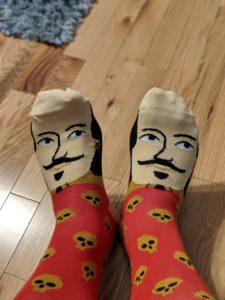 More than one person said to go to the RSC Gift Shop, they have stuff that nobody else has.  I found that hard to believe, but I’m a believer now.  I don’t need yet another copy of the sonnets, or a shot glass or coffee mug, but I could wear Shakespeare socks every day. I have a pair that my kids got me for Christmas and now I have two! 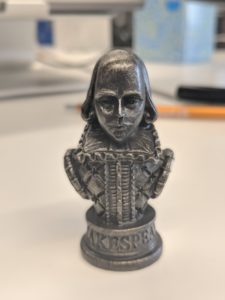 Last but not least!  I’m glad I didn’t buy pointy featured Shakespeare on that first day, because at the RSC shop I found this little guy who I like much better. He’s now sitting happily among his friends on my desk.

That’s it!  We now resume your regularly scheduled trip through Shakespeare Geek’s Stratford-upon-Avon.

Our remedies oft in ourselves do lie, which we ascribe to Heaven.