So we head out of Stratford-upon-Avon to continue our adventures in London, but fear not! Just like the man himself, our Shakespeare adventure does not stop just because we’ve left home. There’s more to come!

This part of the trip is the family trade-off.  They put up with my stuff, now I put up with theirs.  We see all the touristy stuff – Kensington Palace, Windsor Palace, Buckingham Palace … you get the idea 🙂  I’m spending my time looking for possible Shakespeare connections, of course.  Which, to be honest, I feel a bit bad for.  The story of Queen Victoria does sound very interesting, it’s just that I have no investment in that story like I do with Shakespeare’s time.  I like doing things where I feel like I’m adding to my knowledge — but if I start with “I know nothing about this”, then it can go the other way and just make me feel stupid. It’s hard to go from three days of “Yes, I probably know just a wee bit more about this than the typical tourist” to “Tell me again which queen lived here?”

But London is not without its Shakespeare. I spot one family tree in one castle that starts with James I and I think, “Oo! I know that name!”

We head for The Eye, which is a giant ferris wheel, because we’re tourists and that’s just what you do.  I am a bit intrigued because a see a sign that suggests we will be able to see The Globe from the top, but we do not (I have misunderstood the sign).  For the curious, I didn’t find it all it was cracked up to be.  If you’re thinking “I’ve been on ferris wheels before, and this is a big one” think again.  You are in an enclosed capsule, which makes sense as we don’t want people falling out or jumping.  But it’s an enclosed capsule that is big enough to hold, oh, 20-30 people.  And an entire ride around takes over 30 minutes.  So a ride on The Eye is really more like standing around in a room with 30 strangers and looking out the window for half an hour.

We take a boat ride on the Thames after our ferris wheel ride, and finally I get to see my Globe! 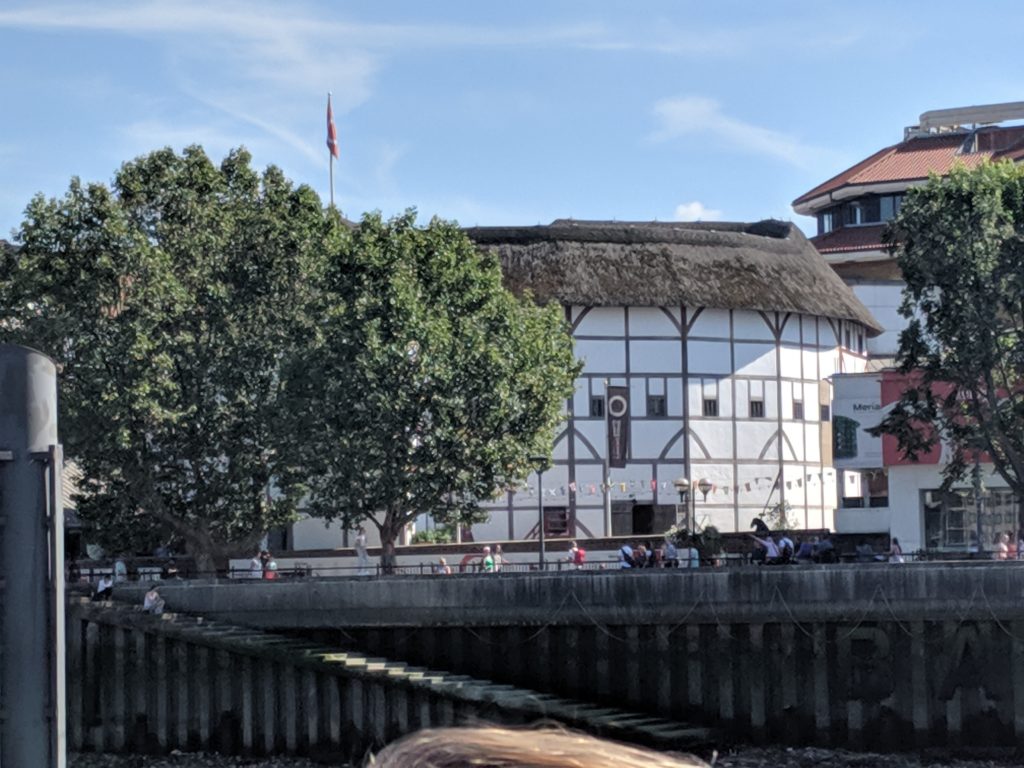 Animatedly I point it out to the kids and tell them that’s where we’ll be going soon.  The tour guide points it out as well, telling the story about how the money for seats would be placed in a box, and then those boxes would be taken to the office, which is where we get the term “box office”.

The next day we visit the Tower of London and I get in a few more Shakespeare references as our Beefeater (how do you capitalize that?) guide tells us the story of the various famous people that have lived and died here.  He gets to the Duke of Gloucester and asks if anybody knows what name we know him as.  “Richard III!” I call out.

“Richard III, very good!” he calls back in response.  “A historian!”

“A Shakespearean!” I retort.

Later I go hunting for evidence of the young princes emprisoned and killed in the tower, but can find none.  Apparently there’s some sort of marker telling the story, but I did not see even that. I did, however, find ravens.  Before we left for the trip someone told me the story of the ravens in the Tower of London, and how “if the Tower of London ravens are lost or fly away, the Crown will fall and Britain with it.” I expected this story to be written down somewhere, and it was.  I expected to see some caged ravens, and I did.  But I also spotted some just sort of hanging out, too, which I thought was pretty cool.

As you can see, I was stretching for Shakespeare references during our London time. We took some bus tours and they did point out some potential Shakespeare references, but they were so small and few and far between that I’ve forgotten most of them.  We did see Westminster Abbey and I did search Poet’s Corner, but it was such a zoo and we were rushed through at such a pace, I feel like I probably missed a number of cool things. I specifically tried to find Laurence Olivier (once I saw that he was there!) but could not.  And if I’d known David Garrick was there I think I would have sought him out, too.  (For the record, Scientist’s Corner was much more interesting – seeing Stephen Hawking next to Isaac Newton was an emotional moment on par with seeing Shakespeare’s grave.)

We came into the world like brother and brother, and now let’s go hand in hand, not one before another.